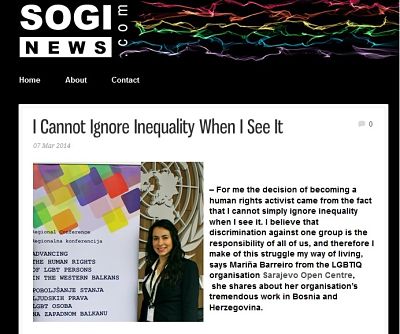 – For me the decision of becoming a human rights activist came from the fact that I cannot simply ignore inequality when I see it. I believe that discrimination against one group is the responsibility of all of us, and therefore I make of this struggle my way of living, says Mariña Barreiro from the LGBTIQ organisation Sarajevo Open Centre,  she shares about her organisation’s tremendous work in Bosnia and Herzegovina.

Mariña Barreiro
Date of birth: 13.05.1985
To relax: The thing that relaxes me the most is the sea, so any time I have the opportunity I need to go by the coast. That fills my battery!Favourite quote: “They can kill all the flowers but they will never make spring end”, Ernesto Che Guevara.

Tell us more about your organisation.

– Sarajevo Open Centre is an independent, non-partisan and non-profit organization dedicated to advocating for the full respect of human rights and decreasing the level of discrimination on the grounds of sex, sexual orientation and gender identity. We empower women and LGBT persons through community activities and promote the human rights of women and LGBT persons in the general public. Sarajevo Open Centre advocates for improved legislation and policies and the implementation of the existing ones within Bosnian and Herzegovinian institutions and international bodies (European Union, United Nations and Council of Europe).

What are your organisation’s priorities?

– We have two clear priorities: LGBT human rights and economical, social and cultural rights of women.

What are the strategic pillars of your work?

– Our strategy to ensure human rights of LGBT persons and women is based on these three: advocating for reduction of discrimination on the basis of sex, sexual orientation, and gender identity on the national level (changing laws and policies) and international level (monitoring international mechanisms and how they are implemented in Bosnia and Herzegovina; empowering the community (we offer free legal counselling, organise empowering workshops and cultural activities); raising broader society awareness about the human rights situation of women and LGBT people (campaigning, training media, open cultural events).

What are the impediments to your work as activists?

– The main challenge we are facing is that even nowadays in Bosnian-Herzegovinian society the LGBT community is one of the most invisible, weakest and marginalised societal groups. LGBT persons are exposed to discrimination, violence and hate speech. Hate crimes and hate speech target especially the LGBT community in Bosnia and Herzegovina. The last example of hate crime targeting the LGBT community happened during the last attack against the second edition of the LGBT film festival Merlinka on February the 1st 2014 that Sarajevo Open Centre was organizing. The situation of violence against a LGBT film festival was repeated after the 2008 Queer Sarajevo Festival had to closed it doors on the first night with 8 injured participants. Once again in 2014 Bosnia and Herzegovina have shown weakness in protecting every citizen’s freedom of assembly.

How do you overcome these challenges?

– In order to cope with the threats and actual violence we spend time and resources on building up a strong network of allies, from the civil society, international community and Bosnia and Herzegovina public authorities. In that way it makes more complicated to use violence against a minority group, when it’s supported by the broader society.

What ideas can you impart to other activists operating in hostile situations?

– For me one of the best strategic decisions we made was to assess our threats and also to remain resilient.  For example in spite of the violence that occurred on the second day of Merlinka film festival we decide to continue with the programme. This was to make sure the LGBT community did not feel abandoned. Even many people in the general community came to support after realising that we could not be deterred. Over two hundred people attended the closing of the festival and over twenty police members surrounded Kriterion throughout the day. I strongly believe that even in a crisis situation we have to break through and see them as an opportunity for advancing human rights and to gain more allies to work with.

If you had to do one thing to change the situation for LGBTIQ people in your country, what would it be?

– For me the first step that would radically change the picture of the human rights situation of LGBT people in Bosnia and Herzegovina is if the community would start reporting human rights violations and claiming their rights when violated. A recent research we have done within the community shows that just one out of seven human rights violations on the grounds of sexual orientation and gender identity are being reported. That shows the lack of trust in authorities of the LGBT community in Bosnia and Herzegovina.