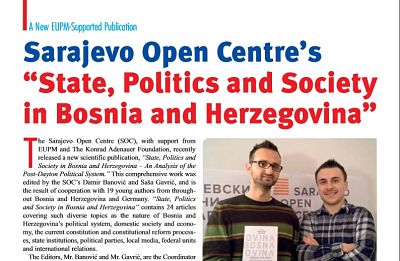 The Sarajevo Open Centre (SOC), with support from EUPM and The Konrad Adenauer Foundation, recently released a new scientific publication, “State, Politics and Society in Bosnia and Herzegovina – An Analysis of the Post-Dayton Political System.” This comprehensive work was edited by the SOC’s Damir Banović and Saša Gavrić, and is the result of cooperation with 19 young authors from through-out Bosnia and Herzegovina and Germany.

“State, Politics and Society in Bosnia and Herzegovina” contains 24 articles covering such diverse topics as the nature of Bosnia and Herzegovina’s political system, domestic society and economy, the current constitution and constitutional reform processes, state institutions, political parties, local media, federal units and international relations. The Editors, Mr. Banović and Mr. Gavrić, are the Coordinator and Executive Director of the SOC, respectively. Speaking to EUPM Mission Magazine authors, Mr. Banović explained that the publication “gives a picture – or photo – of the current system as it is, rather than trying to analyze its good or bad points.”

The 19 young authors who contributed to this publication are highly educated researchers and academics in the fields of law, political science, sociology, philosophy and economics. They represent many of the major universities in Bosnia and Herzegovina. SOC representatives are particularly proud of the publication's positive example of cross-entity scientific cooperation and research, and hope to continue to encourage such processes in the future. The extensive publication is 589 pages long and may be classified as a monograph.

SOC Coordinator, Mr. Banović, expressed his gratitude to EUPM for its support of the publication, noting that EUPM recognized the scientific importance of supporting youth and education, as well as providing a concrete means by which individuals in Bosnia and Herzegovina could become familiar with the political system. “State, Politics and Society in Bosnia and Herzegovina”is available for purchase at the bookstores of the Law and Philosophy Faculties of the University of Sarajevo and was published by University Press – Magistrat Sarajevo. For those interested in purchasing the book online, please visit www.knjiga.ba or www.interliber.com for more information.