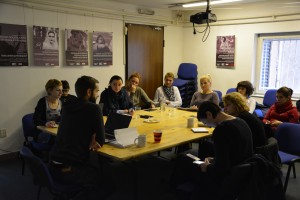 On Saturday, 21/11/2015 the lectures of Module 3 (Culture and Ideology) and of Module 4 (Feminist ethical and political theory) took place, and were led by Nebojša Jovanović, who holds a PhD in gender studies, and Amila Ždralović, MA of sociological sciences and teaching assistant at the University of Sarajevo Law Faculty.

In the scope of the lecture Psychoanalytical contribution to the theory of ideology there was talk about its principal matter of concern – the unconscious, sexuality, fantasy, habitus and doxa (as the terms that could potentially replace the stiff and exclusive term of ideology). The strong and productive connection between feminism and psychoanalysis was also analysed.

On Friday, 27 November the lectures start at 5 P.M. In the scope of the Module 3, Ajla Demiragić will speak about the relation between feminism/s and nationalism, in the text and context.