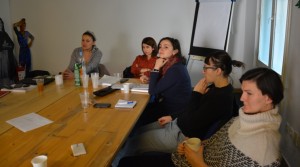 On Saturday, 24/10/2015 the lectures of Module 3 (Culture and Ideology) and of Module 4 (Feminist ethical and political theory) took place, and were led by Nebojša Jovanović, who holds a PhD in gender studies, and Amila Ždralović, MA of sociological sciences and teaching assistant at the University of Sarajevo Law Faculty. The second meeting of the advocacy-activism seminary that is led by Tijana Cvjetićanin also took place.

The second meeting in the scope of the advocacy-activist seminar was dedicated to the planning of the action for the improvement of the state and financing of the safe houses for women victims of domestic violence in Bosnia and Herzegovina that will be realised during December this year.

Amila Ždralović, talking about the subject of Feminist critique(s) of Habermas’ ethics presented Habermas’ theory of the communicative action and the model of deliberative democracy. During the second part of the lecture, she reviewed the Habermas’ theory in the works by Sheyla Benhabib. The third part of the lecture was based upon the disputable issues in Habermas’ theory of communicative action (the distinction between the private and public sphere, the problem of homogenisation of the public sphere, the ethics of discourse vs. the ethics of context).

Nebojša Jovanović dedicated his lecture (The Backbone Marxist meanders) to reviewing the relation between Marx and the so called Marxist vulgata, or the later interpretations of the Marxist theories and conceptualisations of ideology, in the context of the analysis of the text by Stuart Hall “The problem of ideology: Marxism without guarantees“.