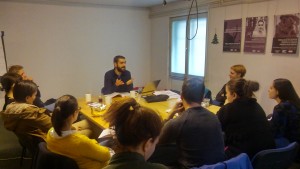 On Saturday, 07/11/2015 the lectures of Module 3 (Culture and Ideology) and of Module 4 (Feminist ethical and political theory) took place, and were led by Nebojša Jovanović, who holds a PhD in gender studies, and Damir Banović, MA of Law and teaching assistant at the University of Sarajevo Law Faculty.

Damir Banović, during his lecture Gender, identity, sexuality, presented the various identity politics that are a challenge as well as a possibility in the scope of the political philosophy and in the scope of the (multicultural) legal theory. This lecture offered many possible views on identity politics and its implications on the questions of gender, gender identity and sexuality. The participants also reviewed the relation between the individual and collective identity, and the influence of the essentialist conceptions on the individual identity and the right to self-determination of a person. The special attention was dedicated to the formative influence of the dominant binary social system on the law, and its further influence on the limitation of the human liberty in the domain of the body and sexuality, as well as vice versa – regarding law in the function of creating the hetero-patriarchal system.

Nebojša Jovanović based his lecture (Foucault’s intervention) upon the retrospect on the historical discourse about sex and sexuality that Foucault speaks about in his work History of sexuality. Foucault supports the thesis that, when we speak about sexuality, the montage of various discourses and strings of power is omnipresent.

The participants analysed the relation between power, knowledge and sex, and tried to understand the history of the various types of sex discourse(s).

On Saturday, 14 November the lectures start at 12 P.M. In the scope of the Module 3, Nebojša Jovanović will speak about the Bourdieu’s intervention and about the psychoanalytical contribution to the theory of ideology.