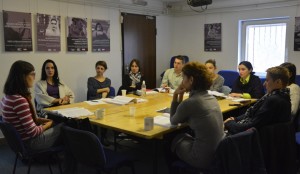 On Saturday, 17/10/2015 the lectures of Module 3 (Culture and Ideology) and of Module 4 (Feminist ethical and political theory) at the Žarana Papić School of Feminism took place, and were led by Tijana Okić, MA of philosophy and teaching assistant at the Faculty of Philosophy in Sarajevo, and Nebojša Jovanović, who holds a PhD in gender studies.

Tijana Okić started her lecture (Feminist critique of austerity measures) by retrospecting the global economic crisis, that started in 2008 (not reducing the previous ones that generated/led to this one), and once again showed that women and gender minorities are especially vulnerable as we speak of the influences of capital on the access to labour market and the relation to paid work. The fact that capital is gender neutral, whilst capitalism is not, was emphasized, as well as the difference between capital as a social relation, and capitalism as a system, or the institutionalized social relations.

Analysing the text Austerity Measures in Developing Countries: Public Expenditure Trends and the Risks to Children and Women (Isabel Ortiz and Matthew Cummins), the consequences of the economic crisis and the austerity measures on the social reproduction, especially on vulnerable categories, like women and children.

The economic context of Bosnia and Herzegovina was specifically analysed, where the economy has been destroyed and non-existant. Analysing the gender relations in bh. society, the participants critiqued the ideological and discursive practices that reduce gender on the blunt question of identity politics, by which gender, as a powerful analytical tool, is being depoliticized, that causes the lack of reviewing the gender aspect of the critique of political economy.

By the end of the lecture, the participants pointed out that the multiple inequalities must be constantly problematised, not only as consequences, but, even more importantly, their causes, or the system that generates them – capitalism, and thus, the participants concluded that, on the contrary, we cannot talk about feminism and a dignified life for everyone.

Nebojša Jovanović started his lecture (The basic conceptualizations of ideology) with the attempt to define ideology, looking at the introductory chapter “What is ideology“, in the book by Terry Eagleton Ideology: An Introduction. He presented several definitions of ideology, which are not necessarily in accordance with each other, but also do not exclude each other.