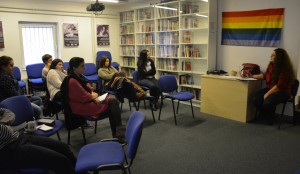 On Saturday, 10/10/2015 the lectures of Module 4 at the Žarana Papić School of Feminism took place – Feminist ethical and political theory. The lecturers and leads of the Module 4 are Tijana Okić, MA of philosophy and teaching assistant at the Faculty of Philosophy in Sarajevo, and Amila Ždralović, MA of sociological sciences and teaching assistant at the University of Sarajevo Law Faculty.

Amila Ždralović started the lecture (Feminist critique of the (neo)liberal theories of justice) by introducing the theoretical reflections on justice, fairness and equity that have always, from the early age, occupied deliberations about the state, society and morals, and thus determining different models for society and state organization.

According to this, and criticizing the masculine measure for justice and all social relations where the women are constantly adjusting to the patriarchal structures, the lecturer presented the feminist reconstructive/alternative approaches to justice that try to redirect the above mentioned approaches towards its more equal version, where the principle of distribution should be established in a different manner.

The participants were also introduced to the basic postulates of communitarianism and liberalism as ideologies that insist on different concepts of society organization: individualism versus community, and, in that manner, the participants discussed the system that would satisfy all the justice and equity requirements in the best way.

Tijana Okić based the lecture (Feminist critique of political economy) around analysing the social relations beyond the Marxist analysis that, dealing with the reproduction of capital, does not analyse the specific position of women, especially in capitalism, and it critiques that analysis for being gender neutral.

In that sense, the participants looked at the feminists’ actions in the 1960s and 1970s that were directed towards the analysis and critique of the conditions for the gender work distribution, and at the feminist theories that point out that the question of the reproduction of capital has to be considered through the question of the production and reproduction of the labour force where women also defray by producing good for the market and, by that, replacing the income of their husbands, so that the work force has become more privatized into the ‘nuclear family’.

The participant dealed with the problem of the soacial work distribution, with a special overview of the issues of reproduction, exploitation and inequality that are inherent to the capitalist system, and that specifically relate to women.