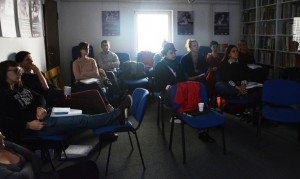 On Saturday, 03/10/2015 the first round of lectures of Module 4 at the Žarana Papić School of Feminism took place – Feminist ethical and political theory. The lecturers and leads of the Module 4 are Tijana Okić, MA of philosophy and teaching assistant at the Faculty of Philosophy in Sarajevo, and Amila Ždralović, MA of sociological sciences and teaching assistant at the University of Sarajevo Law Faculty.

Tijana Okić started the introductory lecture by critically reviewing the second wave feminism, as well as the historical-materialistic perspective of the feminist contribution to ethical and political theory and, in that context, emphasized the inseparability and overlapping of ethics and politics, because politics largely has ethical implications. During the first part of the lecture, the participants were offered a theoretical frame for thinking about the feminist critique of the so called contractual theories, as well as the terms justice, equity, concern, feminisation, labour force, capitalism, productive and reproductive work. 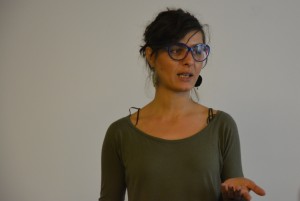 The lecturer talked about the points of discordance within different feminism theories of the second wave of feminism and, in that context, emphasized that feminism should be the idea of a mass movement, instead of being exclusive only in the domain of the work of specific feminists. The participants reviewed the text “Feminism, capitalism and the artifice of history” by Nancy Fraser, in the context of denoting the main issues within different theories of the second wave of feminism. The lecturer also introduced the term class, and explained the dynamic of class as one of the central terms of left feminism. In the scope of the third theme (Feminism/feminisms. The left and feminism – Marxist, socialist, materialist. State feminism versus left feminism), Tijana Okić started the lecture by recognizing the general NGOisation of feminism, its remarking, so that today we are witnessing the privatisation of the feminism movements that make a class for itself. A discussion about the relation of feminism – feminisms was opened, as well as about the several mutually opposing streams within feminism as a theory and a movement. The discussion was directed towards the distinction between the streams within the second wave of feminism: liberal that developed within the frame of the system, radical that directed its attention towards the relation between the oppression of women and patriarchy, socialist that was based on the critique of capitalism and Marxism, materialist, and Marxist that expands the Marxist categories and criticizes the capitalist oppression of women.