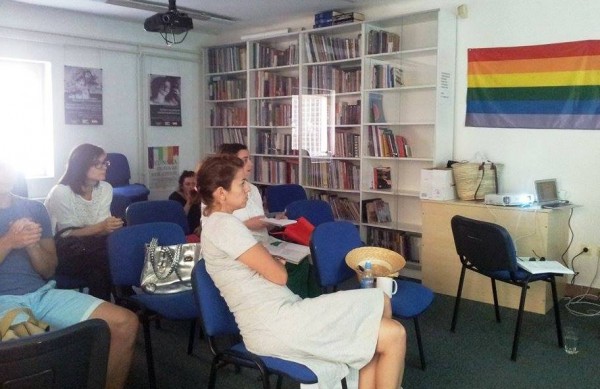 On Saturday, 19/09/2015 the second round of lectures of Module 3 at the Žarana Papić School of Feminism took place. The lecturer and the leader of Module 3 is Danijela Majstorović, professor of English Language and Literature on the Faculty of Philology in Banja Luka where she teaches the linguistic group of subjects, discourse analysis and cultural and media studies.

In the scope of the first theme, the lecturer introduced the participants with the intellectual course of cultural studies, in the context of Marxism. She gave the introduction to the basis of Marks’ understanding of social structure, as well as an insight into the relation between the economic basis (production relations and means of production) and outbuilding (culture, art, politics).

The participants emphasized the need of awakening the deeply exploit relations that rule in the capitalist society and culture, and recognized the Marxist dedication to social change in the future feminist engaged action, the basic task being combining Marxism and feminism through cultural studies.

The lecturer emphasized that the non-presence of women in the discourses about disturbing power relations and the ideas of the ruling class, does not give substance or relevancy to the story. So, by setting the imperative that women, as well as the other in-equal social groups, should constantly expose everything to critique and crisis, and by setting forth gender as a variable, must impose the gender equality discourse with always clear arguments.

The lecturer presented to the participants the Frankfurt School, and the main thoughts of its representatives: Benjamin and Adorno.

In the scope of the second theme, the participants talked about structuralism, ideology, the subjective interpellation and ideological state apparatus, about hegemony and contra-hegemony, as well as about the role of the organic intellectual.

The participants looked back at the achievements of modernism and postmodernism/post-structuralism, and at the question of what have we gained through modernity, capitalist economy and the creation of the nation-state. There was a special discussion about the anti-essentialism and how everything is constructed by the discourse, not given and invariable, like the national, gender or any other identity.

There was also talk about the linguistic turn in cultural studies and about the role of language, a privileged medium that is not neutral, but gives meaning to everything we do, in order to better understand culture.

On the basis of everything discussed during the lecture, it was concluded that our cultural repertoires: our origin, education, interests, the environment that we grow and develop in, all influence our interpretations of the world, and that everything should be analysed from that point of view.

On Saturday, 3 October the lectures of the Module 4 start at 10 A.M. Amila Ždralović will talk about the relation between feminism/feminisms and the left. Tijana Okić will talk about feminism, post-structuralism and critical theory, in the context of the problem of the political subject, as well as about the feminist critique of the (neo)liberal theories of justice.