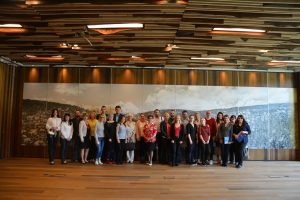 Equality Academy 2017 is consisted of three modules (april-june 2017). First module, Gender Equality Policies was held in Sarajevo from 21-23. April 2017. More about this module you can find out here. Second module of the Equality Academy “Feminism for everyone” was held from 26-28. Of May 2017. It was consisted from lectures, workshops and meetings with civil society representatives.

Following issues were discussed on the second module of the Equality Academy 2017:

– What is feminism and why it is important today?

– How can feminist principles be translated into concrete public policies at the local level?

– The role of men in reaching true gender equality

Within this module the workshop regarding the mapping of the concreete act fields on local level was held. Withing human library which was held participants had the opportunity o discuss with lesbian, gey and bisexual women.

The programme of the second module of the Equality Academy is available here.