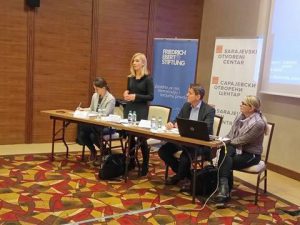 Equality Academy 2017 is consisted of three modules (april-june 2017). First module, Gender Equality Policies was held in Sarajevo from 21-23. April 2017. It was consisted from lectures, workshops and meetings with civil society representatives. The focus of this module was on the basics of gender equality in BiH.

Following issues were discussed on the first module of the Equality Academy 2017:

– Gender Equality Policies: What can we expect?

– Elections: Legislative, process, institutions; Where are women in legislative and executive power?

Within the Gender Analysis training participants had the opportunity to reconsider concrete documents in order to apply the principles of gender analysis on them. The discussion Gender Equality: The cooperation between politics and civil society organizations was held as well.

Lecturers on this module were: Samra Filipović-Hadžiabdić, the directress of the Agency for Gender Equality of BiH; Adnan Kadribašić, the expert for gender equality and antidiscrimination policies; Vinka Berjan, Municipality Istočna Ilidža; Adis Arapović, Centres of Civil Initiatives.

The programme of the first module of Equality Academy is available here.