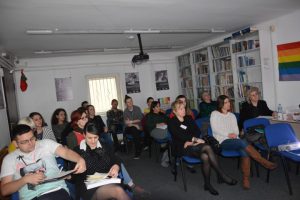 On Tuesday, 19 April the second set of lectures at this year’s Žarana Papić School of Feminism, with the second generation of students, took place. In the scope of the Module 1 – Introduction to feminisms: History, terms, theory, Jasmina Čaušević, MA of social sciences in the field of gender studies, talked about the history of the movement – the beginnings of the feminist movements and women’s associations in B&H. In the scope of the Module 2 – State, law, equality: de iure and de facto, Adnan Kadribašić, lawyer, introduced the students to the international and domestic legal framework for gender equality and women’s rights.

On Tuesday, 26 April the lectures start at 5:30 P.M. In the scope of the Module 1, Adriana Zaharijević will talk about the history of the movement, respectively about the beginnings of the feminist movements in the context of the demands for the political and other freedoms. In the scope of the Module 2, Adnan Kadribašić will talk about discrimination on grounds of sex, gender, sexual orientation and other circumstances.