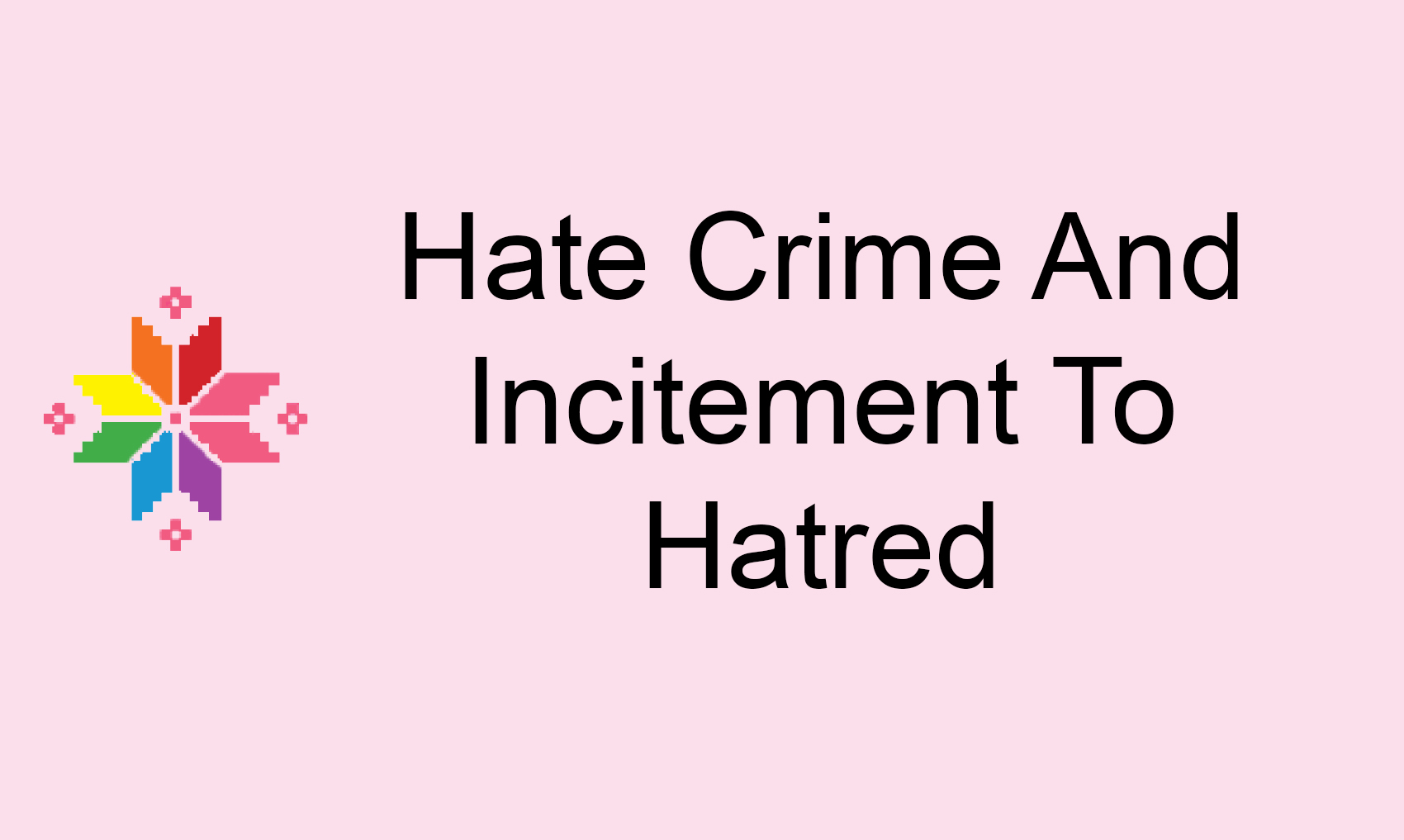 In April 2016, the Parliament of the Federation of BiH adopted the Law on Amendments to the Criminal Code of FBiH which, inter alia, regulates hate crime in FBiH. Six years after the first initiative to regulate hate crime, both entities and Brčko District stipulate more severe sanctions for these criminal offences in their criminal codes.

Provisions which sanction incitement to hatred, hate speech and violence are included in the criminal codes of both entities and Brčko District, but they are unfortunately limited exclusively to prohibition of incitement to hatred and violence on national, ethnic and religious grounds. With this legal framework, it is impossible to sanction incitement to hatred and violence against LGBTI persons, which proliferate on internet portals and social networks and frequently grow into discrimination and hate crime. Criminal codes of both entities and Brčko District should therefore be amended with the aim of introducing additional grounds on which the incitement to hatred, hostility and discord is prohibited, which would be in line with the ground currently recognized by the hate crime institute which encompasses, inter alia, sexual orientation and gender identity.

Training of police officers, judges and prosecutors still depends on the civil society sector and international organizations. Hate crime on the ground of sexual orientation, gender identity and sex characteristics are either covered superficially or not at all in the curricula at the police academies, while the permanent and specialist police training and the trainings of judges and prosecutors do not address hate crime in a systematic and coherent way.

Sarajevo Open Centre, in cooperation with the OSCE Mission to BiH, continued working on trainings for the police and interns at the courts and the prosecutor’s offices in 2016. Sarajevo Open Centre conducted a training the trainer programme for police officers of 9 cantonal ministries (Sarajevo Canton Ministry received a similar training previously). After the ToT, cantonal MIs announced that police officers who completed the training will train their colleagues in the area of appropriate prosecution of hate crime as part of their 2017 permanent training.

The European Commission against Racism and Intolerance (ECRI) published its third report on Bosnia and Herzegovina in which it states that the authorities should develop, together with NGOs and international organizations, a comprehensive strategy to combat hate speech as well as activities to promote tolerance towards LGBT persons. Based on the findings of its third BiH Report, European Commission against Racism and Intolerance (ECRI) recommends that the BiH authorities: (i) carry out an evaluation of hate crime related training activities for police officers, prosecutors and judges in order to make any necessary improvements; (ii) continue to roll out and expand these training programmes; (iii) ensure that violence against returnees, religious communities, and LGBT persons is adequately covered in these trainings.

At the 1141st meeting of the OSCE Permanent Council, European Union expressed its concern about reports and claims of violence against gay men in Chechnya and said that such acts constitute crimes and violation of the Russian Federation’s international committees. The authorities were requested to dissociate themselves from such behaviour and to put an end to violence ensuring safety and respect for human rights to all citizens of Chechnya. As a potential candidate state, Bosnia and Herzegovina also joined the European Union statement.

Of the 12 cases documented from January to April 2017, 5 have been cases of domestic violence, ranging from threats to blackmailing, unlawful deprivation of liberty and prohibition of movement, violence and bodily injury, forced medical treatment. The perpetrators in all cases have been parents or siblings with the support of extended family.

Homophobic and transphobic peer violence is a continuous problem also in 2 cases from 2017. These cases have been reported to the competent ministries of interior and social work centres and, although the institutions did take action together with schools to put an end to the violent behaviour in the specific cases, there is an evident lack of a concrete institutional plan to combat peer violence and develop an inclusive and tolerant educational environment which would include the LGBTI perspective as well.

In April 2017, a book entitled Nelagoda s medijima (Unease with the Media) by Fahira Fejzić-Čengić was promoted at the Faculty of Political Sciences. The author has been promoting xenophobia, homophobia and transphobia not only in this book but also in her other books and she is teaching at the Faculty.

In her 2014 book Stvarnost i mediji: vrijeme istrošenih ideologija (Reality and the Media: The Time of Worn Out Ideologies) the author describes homosexuality as a “modern kitsch” and homosexual persons as “people behind the curtain” making a reference to the Islamic mystique Ibn Arebi. Mrs Fejzić-Čengić claims that homosexual persons are unable to accept their own boundaries, their human finiteness and that they truly are people behind the curtain as they, according to the author, have their mind, eyes, sight and all other senses covered. The cover on their senses explains why homosexual persons cannot comprehend the substance of things or the substance of the world, as she claims. In addition, the book underlines that human rights are only those rights having historical and vertical foundation; on the other hand, she says that a homosexual relation is a right and freedom of human choice but that a homosexual person, “covered and ignorant”, must consume it in intimacy and privacy. To explain the historical and vertical foundation of human rights, the author takes into account that “such consummation” have always existed but such a “sexual state” should be kept within the intimacy of four walls. By these contradictory claims, the author says that the right to a homosexual relation is a human right and, at the same time, that this human right can be practiced exclusively “within the intimacy of four walls” – showing a lack of understanding of the legal, political, and philosophical idea of this type of a right. The claim is followed by other contradictions, stating that homosexuality or the need of homosexuals to “exit the four walls” is a novelty of the 21st century which again shows the ignorance of the essential needs of homosexual people which in no case refer to sexual “exits” beyond four walls. To explain what she means by these exits from four walls, the author describes the manner in which this “perversion” came about – namely, she says, this “novelty” of the 21st century is based on shock, it shocks, reshapes and halts the natural development. In the conclusion of this section based on hate speech, Mrs. Fejzić-Čengić writes that homosexual persons get “sexually discharged” in a way not practiced either by wild or domestic animals.

In Unease with the Media published in 2016, the author explains the term pair logos and says that a pair is man and woman and that creation in pair is meaningful only in pair. The book also reads that “routine modernisation” constitutes an imitation of the Sheitan/Dajjal.