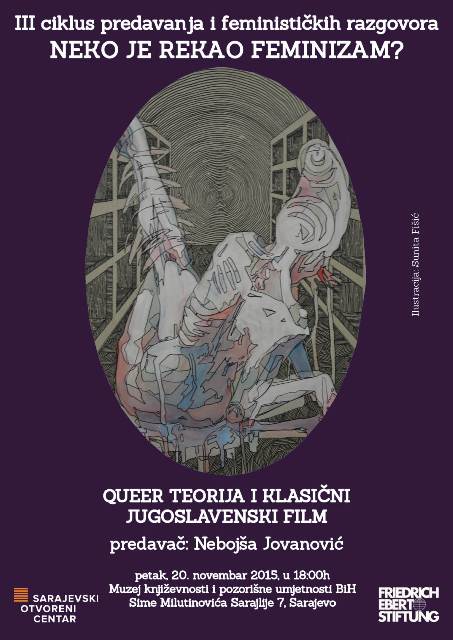 Sarajevo Open Centre, in partnership with the Friedrich Ebert Foundation, continues with the lectures within the third cycle of lectures and feminist discussions Someone said feminism. The seventh lecture, titled Queer theory and classical Yugoslavian film will be held on Friday, 20 November this year at the Museum of Literature and Theatre Arts of Bosnia and Herzegovina, starting from 6 P.M. The lecturer will be Nebojša Jovanović, who studies the Yugoslavian film in the light of the feminist movie theory. He holds a PhD in gender studies from the Central European University in Budapest, with the dissertation on gender and sexuality in the classical Yugoslavian film. His texts were published in the magazines Hrvatski filmski ljetopis, KINO!, KinoKultura, i Studies in Eastern European Cinema.

The lecture is a continuation of Nebojša’s last-year lecture on the classical Yugoslavian film in the scope of the second cycle of lectures Someone said feminism. While that lecture analysed erotica on the film screen, through a series of hetero-normative motives, to the focus of this lecture he will bring the queer motives, ie. the movie representations that question the hetero-norm. The lecturer will discuss with the participants the (non)propensity of the Yugoslavian cinematography towards the queer characters. There will also be talk about the viewpoints certain movie critics and historians who emphasize that the movie directors have not showed the male and female homosexuality (and other “deviant” sexual practices and identities), because they were serving the “totalitarian” regime that, among other characteristics, was inherently homophobic.

During this lecture, Nebojša will question the following thesis and set it as unfounded in the movies themselves, and will prove two thesis: 1) the Yugoslavian cinematography produces much more queer motives that it is usually considered; 2) those motives cannot be reduced down to the negative and caricature displays of queer sexuality, as it is often claimed by the representatives of the thesis about the totalitarian homophobia. During the lecture, Nebojša will plead for the use of queer theory, as one of the feminist analytical apparatuses that is inevitable in researching the gender and sexual regimes of the socialist past.

The illustrations that will follow all the announcements of the lectures and the discussions, are made by the young Sarajevo artist Sunita Fišić. Her works are available on the Facebook page Sunita Fisic Illustration.