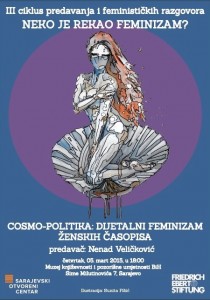 Sarajevo Open Centre, in partnership with Friedrich Ebert Foundation, shortly before International Women’s Day, opens the third cycle of Somebody said feminism? with lectures and feminist discussions titled Cosmo-politics: dietary feminism of women’s magazines which will be held on Thursday 05 March at the Museum of Literature and Theatre Arts of Bosnia and Herzegovina, starting from 6pm. The lecturer will be Nenad Veličković, a writer and professor at the Philosophy Faculty in Sarajevo, who will talk about the (anti)feminism of women’s magazines, which although formally target to empower and emancipate women, however, belong to the domain of consumer culture, and again perpetuate patriarchal matrix showing women as objects and beings for other beings (men) and not as a being for themselves. Veličković will give interesting examples from the chapter Cosmoboy from his book Viva sexico, and cite some recent examples, in his recognizable style and also analyze advices, advertisement and the doctrine that Cosmopolitan, Elle, as well as local women’s magazines offer to their readers.

English translation of the lecture will not be provided.