Training programs for the police and judicial authorities

Educate police officers, prosecutors, judges, judiciary in general, about human rights of LGBT persons is of immense importance. Although there is significant amount of legislation in BiH, persons in charge of law enforcement do not use all the options offered by the legislation. For this very reason, the Sarajevo Open Centre started working, and still work with the judiciary. In the text below, Jozo Blažević remembers the very beginnings of SOC’s training activities with these stakeholders

It was the year 2013. For us in SOC, this was an ordinary business day, when the police came to visit us self initiatively. I remember that we were scared because we thought that they came to arrest us or something, although we knew that we did nothing wrong. The fear was justified, because we were, and still are, aware of the fact that we live in a closed, traditional, conservative society intertwined with various types of intolerance, where being an LGBTI person is still socially unacceptable. Luckily, it was not the case this time. Police officers came to see what we were doing and what we were working on in the domain of the protection of human rights of LGBT persons, one of the most marginalized groups in BiH.

This is how the cooperation between the Sarajevo Canton Ministry of Interior and Sarajevo Open Centre started. Until that moment, we had not worked with any state institution on the topic of human rights of LGBT persons. Soon after that, we started organising trainings for police officers from the Ministry of Interior of Sarajevo Canton. Decision of the Sarajevo Canton Ministry of Interior to include the module about hate crime against LGBT persons in their program of permanent trainings meant great success. It was a matter of historical importance, because this was the first time that all the police, from the police officers that work with the community to junior inspectors, attended the training about hate crime against LGBT persons. Our cooperation continued in the following years through trainings, but also through securing of public events

It seems to me that the attack on Merlinka 2014 Festival was the key factor that contributed to additional strengthening of the cooperation between the Sarajevo Canton Ministry of Interior and SOC. Unfortunately, I think that only then the importance of physical protection of LGBTI persons was fully understood. We had to teach the police about it. We also had to teach them many other basic things about sexual orientation and gender identity. We had to teach them that LGBTI persons are not abstract, that they live in Sarajevo, in our country, that it could be their neighbours, colleagues etc. This was not easy. I remember fierce discussions at the beginning. Individuals provided great resistance at the trainings. Sometimes things escalated to a point where some police officers left the lecture. However, although we may not have realised why we faced resistance on that level, it was clear to us that we had to go through this process. We knew that we needed to be patient and that the police were very important to us – LGBTI persons, just like to all other citizens of BiH society. We did not give up.

Decision of the Sarajevo Canton Ministry of Interior to include the module about hate crime against LGBT persons in their program of permanent trainings meant great success. It was a matter of historical importance, because this was the first time that all the police, from the police officers that work with the community to junior inspectors, attended the training about hate crime against LGBT persons. Our cooperation continued in the following years through trainings, but also through securing of public events

In this way, we reached a large number of police officers who attend the trainings and learn about the hate crime against LGBT persons. Our cooperation has lasted for four years already, and it continues. In the past two years, we managed to establish successful cooperation with the FBiH Police Academy and the Federal Ministry of Interior.

Trainings of judges and prosecutors

There is a lot more to say, but I want to emphasize that things were not easy for us at the beginning. It is easier now, which basically tells us that our work with the police paid off. All of us know that the police are there to protect all citizens, regardless of their differences. 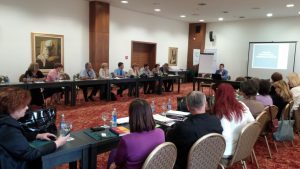 We certainly could not leave out prosecutors and judges in the judicial chain. Our cooperation with them and with the police has lasted for four years already. Trainings that we conduct with them are implemented in cooperation with the Judicial and Prosecutorial Training Centre of FBiH. We informed these professionals about the improved anti-discrimination and criminal legislation and practice in the domain of human rights protection with the emphasis on LGBT persons as a marginalized social group, and we showed them how important it is for their work in judicial institutions. Also, we constantly want to sensibilise and inform judges and prosecutors about efficient methods of protection and prosecution of human rights violations based on sexual orientation, gender identity and sexual characteristics in BiH, in accordance with domestic legislation, while also respecting international and regional legal standards. Of course, this cooperation included, and still includes moments that are not easy for us, or to put it simply, that are not pleasant for ears. However, every time, it tells us that we have to work even harder.

We must not forget that in July 2012 we organised the first Political Leadership Academy in order to contribute to strengthening of political participation of young people and to the improvement of gender equality through political education and human rights promotion. Members of different political parties and representatives of civil society organisations participated in the Academy. The Political Leadership Academy program was the first training program of Sarajevo Open Centre which combined political education and human rights, and through the covered topics, it tried to provide broader perspective of political participation, different from the one present at the BiH political scene.

In the following years, SOC developed other programs that were focusing on gender equality and participation in political life. Apart from the education about political system and topics that deal with leadership skills required for young politicians, the program included specific topics dealing with gender equality and human rights of marginalized groups, such as the LGBTI community.