THE BLACK CHRONICLE
Obstacles and Problems

Ten years of SOC’s existence included many friendships, partnerships, work and success, but also a lot of negative experiences that enabled us to learn and grow. All of this created the organisation and team that we are today, and encouraged us to fight for human rights of LGBTI people and women and for a more equal BiH 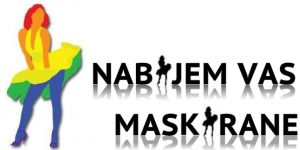 On February 1st 2014, a group of 14 men wearing masks barged in the Art Cinema Kriterion in Sarajevo and attached participants of the discussion which was taking place within the Merlinka festival, inflicting light injuries on three people and severe psychological consequences on everyone who was there. Although the gathering had been reported 20 days beforehand, the police were not there to prevent the attack in a timely manner. The Sarajevo Open Centre filed two criminal reports to the Prosecutor’s Office of Sarajevo Canton, as well as a report to the internal control of the Sarajevo Canton Ministry of Interior. However, three years after the attack, indictments have not been issued against the responsible persons. In November 2016, SOC submitted an appellation to the Constitutional Court of BiH for violation of the right to freedom of assembly.

Two years later, another attack took place in the Art Cinema Kriterion, on 4 March 2016, when four young men barged into the bar, insulted people and threw bottles, ashtrays and glasses at them, and threatened to burn the bar down because LGBTI persons used to go out there. Two people were injured. A year after the attack, this case has not been prosecuted either, and the police still investigate without any concrete results.

The homophobic and transphobic bullying also represents a continuous problem, especially in the past three years, and although such cases were reported to competent ministries of interior and social work centres, the absence of a concrete institutional plan against bullying and for the development of an inclusive and tolerant educational environment is still evident.

Following the general elections in 2014, when the Council of Ministers of BiH and entity-level and cantonal governments were appointed, both the international standards defined by the UN’s CEDAW Committee and the Council of Europe and the provisions of the BiH Gender Equality Law stipulating equal representation of men and women in the executive government with minimum 40% of less represented sex were violated. For example, the Council of Ministers of BiH appointed two women ministers as opposed to seven male ministers, whereas in Zenica-Doboj Canton and Herzegovina-Neretva Canton governments, not a single woman was appointed as a minister for the 2014 – 2018 term.

In order to prevent such violations and to ensure 40% representation of women ministers at the state level, Sarajevo Open Centre and Gender Equality Agency of BiH prompted the Gender Equality Committee of the House of Representatives of BiH Parliament to propose amendments to the Law on BiH Council of Ministers in 2015, which stipulated that the Council of Ministers may not be appointed if the quota has not been fulfilled. This proposal passed the first reading, but it was not adopted eventually.

The number of women did not increase in the legislative government branch either after the general elections in 2014 – there was the total of 19.90% of women on all government levels. In 2015, SOC proposed that the Law on Amendments to the Election Law of BiH should include the obligation of parties to ensure equal numbers of men and women (50% of both sexes) on candidate lists, with consecutive ordering of male and female candidates, in order to increase the number of women in parliaments and assemblies. The Gender Equality Committee of the House of Representatives of BiH Parliament adopted this proposal and sent it to the legislative procedure. However, it did not even pass the first reading.

On 30 March 2017, the Sarajevo Open Centre announced the scheduled organisation of a protest march on May 13th to the Sarajevo Canton Ministry of Interior, on the occasion of the International Day against Homophobia, Transphobia and Biphobia, in order to raise public awareness of the inadmissibility of violence against LGBTI people. As the march was planned to take place on the road section from the Eternal Flame to the Parliamentary Assembly of BiH in Sarajevo, the approval of the Sarajevo Canton Ministry of Transport was requested on April 11th. According to the Law on Basic Safety of Roads in BiH, such approval is to be requested minimum 15 days before the planned event. According to the Law on Public Assembly in Sarajevo Canton, the event is to be reported minimum seven days before the scheduled date, and if the event is to take place on a road, the approval of the SC Ministry of Transport must be attached. 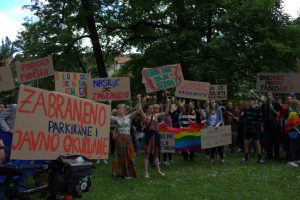 From May 4th to 11th, members of the Sarajevo Open Centre were communicating with a representative of the SC Ministry of Transport by telephone and receiving contradictory information, whereas the Ministry did not issue any official opinions. When it was reasonable to conclude that it would not be possible to adequately organise and prepare the event in accordance with the law without the decision of the SC Ministry of Transport, although they had already invested efforts and resources in the event, on May 11th, 2017, 48 hours before the scheduled event, at the planned last meeting with the police concerning the organisation of the protest march, SOC members scheduled a protest in front of the Sarajevo Canton Government building. The SC Ministry of Transport issued the decision on May 11th, 2017 at 4:08 p.m., which was too late and did not leave enough time to SOC to take further steps in order to organise the march, and it was too late for SOC to fulfil its legal obligation as the organiser to inform the public about the traffic regime change via the media at least 48 hours beforehand. The decision arrived five hours after a press conference organised by SOC members in order to inform citizens about cancellation of the march because of the administrative silence of the SC Ministry of Transport, explain that this was the violation of the right of freedom of assembly, and to announce a new protest.

SOC submitted a complaint about the violation of the freedom of assembly to the Human Rights Ombudsman Institution of BiH, and the Ombudsman Institution issued a recommendation confirming that the SC Ministry of Transport violated the right to freedom of peaceful assembly by preventing the organisation of the protest march against violence against LGBTI persons with its passiveness and administrative silence. The Ombudsperson’s arguments among other things read that public assemblies require many practical solutions, which is why at least minimum level of agreement between the organiser’s representatives and the authorities about the time, location, traffic regime and other factors are necessary.