BUILDING OF THE COMMUNITY AND MOVEMENT

How to build the LGBTI community and movement? With lots of patience, with creativity and desire to persist until the attainment of pursued objectives. By spreading the idea outside of the capital, insistence on persisting with the idea, and by fostering interpersonal relations and experience exchange. Below you will find a story about SOC’s work on building of the LGBTI community and movement in BiH 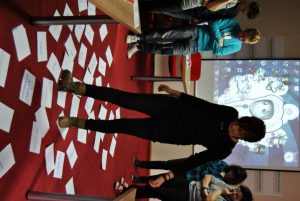 Participation in direct work with the LGBTI community is of immense importance for overall work on the improvement of LGBTI rights. When we started organising regular monthly Gay-Str8 parties back in 2011, we knew that they would not be enough to empower individuals. However, these parties were a very important part of the story about the beginnings of LGBTI gathering. It seems to us that enough time has not passed by yet to enable us to speak about a built community and strong LGBTI movement in BiH. However, there is no doubt that all we did from 2011 to 2015 contributed to the establishment of a small but important group of LGBTI people that will engage in activism. But even those who have not appeared in public participated in our workshops, trainings, movie projections, discussions and different events that meant a lot to them for individual improvement, incessant fight and coping with the process of coming out. 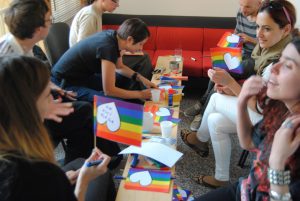 It was interesting how we chose words carefully at the beginning of our work, trying to feel the public pulse. In 2011, we launched a movie cycle questioning the hetero-normativity entitled Sex, Pop and Politics, and the acronym LGBTI or words ‘lesbian’, ‘gay’, ‘bisexual’ or ‘trans’ person were not mentioned anywhere. While we were testing the public reaction at the time, it was important to us to publicly announce the events. Thus the movie announcements could be found in Oslobođenje daily newspaper, Dani magazine, and in the other media. We were hoping that through this not-so-direct title, the message would reach the target audience – LGBTI people. And it did. The Sex, Pop and Politics cycle was very important for our contribution to the community building, getting out of the ‘four walls’ cult and establishing contacts, meeting people and socializing, because this is how all other things start. The movie projections were organised in five cities in BiH: Banja Luka, Sarajevo, Tuzla, Zenica and Mostar. At the beginning, some LGBTI persons used to come when the movie had already started and lights were out, and they left just before the end of the movie. However, they did come and they gradually became more relaxed and stayed even after the movies. Why are we mentioning this, and what does it have to do with building of the community and movement? It has, and a lot too. These projections, which were taking place in parallel with regular parties, contributed to the establishment of connections within the community, and helped people start getting to know one another and exchanging experiences outside of internet chats and forums, and helped LGBTI persons start coming out before one another, for a start.

In early 2012, we decided to launch a series of workshops for LGBTI people to discuss LGBTI rights, queer culture and art, history of LGBTI activism, and eventually about coming out. It wasn’t at all simple to gather LGBTI people in such workshops. There were still reservations about coming to an organisation or premises to talk about these topics in daylight, although the workshops were never public, and information about them were shared via verified communication channels, through mailing lists collected at parties or movie projections. But regardless of the reservations, a large number of LGBTI persons attended the initial workshops in the following three years, where they probably gained the first insight in their rights in BiH. We remember the first workshop in Mostar, when four people applied, and only two showed up. The other two were too afraid to come after all. But two people did come, and they definitely broke the ice and spread the news, and six months later, we had 15 people attending the second workshop in Mostar. That is when we knew that persistence pays off and that we have to work more and more with every day.

We wanted to see LGBTI persons gathered in one place, with smiling faces, empowered and with a desire to do something for LGBTI people in their cities

The situation with organisation of the workshops changed for the better with time. The number of participants went up from year to year. People were becoming freer and more visible. In 2014, we organised another series of workshops for LGBTI people. We were in doubt whether we would be able to hold the workshops at all, given the previous experience. However, when we announced the call for applications, many people responded. It surprised us and we were delighted because finally people were not afraid to apply, not to mention showing up at the workshops. This was one of the decisive moments for SOC’s activist work, and especially for activism outside of Sarajevo. This year, through our workshops we contributed to the establishment of three more groups: LibertaMo in Mostar, B.U.K.A. in Banja Luka and TANKA in Tuzla. These were informal groups at start, but their existence was very important. Soon after that, we helped groups LibertaMo and B.U.K.A. to officially register as associations dealing with LGBTI human rights, whereas TANKA is still an informal group of citizens. Be it formal or informal, these were the first associations that started working on LGBTI topics in these cities.

We gained extensive and rich experience through all these activities. This year, we organised the first school for activists from all cities in BiH about human rights of LGBTI persons. We experienced different, sweet and funny situations. For example, some of the activists even fell asleep in sauna, and some of them contacted us later with funny email subjects such as ‘Hi mum’. These are the people who later started seriously working on human rights of LGBTI people through various approaches: work with the community, different street actions, art… Basically, we wanted to see LGBTI persons gathered in one place, with smiling faces, empowered and with a desire to do something for LGBTI people in their cities.

Masks as a turning point 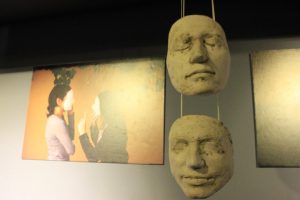 Sometime in 2013, we launched social gatherings in SOC. They were taking place on Wednesdays and were nothing like we had envisaged. On many occasions, nobody turned up. Only we from SOC were there, or somebody would bring a fried at times. On the other hand, some gatherings had pretty good attendance. We often talked about the cause, why people did not want to come. In these contemplations and development of creative ideas, we decided to include the community n something concrete. We came up with the idea to make plaster masks. Students of the Academy of Fine Arts in Sarajevo helped us in this endeavour. Over a period of two months, we used to get together in SOC’s garden every Wednesday and mould masks on faces. A small part of the community was included in the production of masks. During such gatherings, we got an excellent idea to use the masks for an exhibition, so we decided to organise a multimedia exhibition that would include masks of LGBTI persons who participated in this project, photos of those persons wearing masks, and a closet in the exhibition room where visitors could hear audio recordings of the persons who made the masks talking about feelings they experience when the society stubbornly pushes them in such closets. It was a great honour for us to participate in creation of this exhibition. The exhibition entitled ‘Masks are for the closet’ is still ‘alive’ and travels to different cities in BiH and the region. We believe that this was a very important turning point for coming out of LGBTI persons into the public space because, although they were wearing masks, they were physically present in that room. Two years later, at the exhibition called The invisible everyday life, LGBTI persons appeared without masks. The previous exhibition, social gatherings and talks every Wednesday and workshops about LGBTI rights, movie projections and parties definitely contributed to this process. 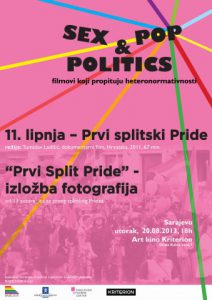 During this period, we rarely, practically never, went out to the street. We believe that the main reason behind it was non-existence of LGBTI persons who would be willing to go out into the street. We admit that back in 2011, many of us were not prepared to go out either. We got stronger every day, thanks to all these developments. When we wanted to make a banner for IDAHOT, the International Day against Homophobia, Transphobia and Biphobia and place it on Ajfelov bridge in Sarajevo, many people who worked on the banner showed up. However, only a few persons dared to go out and place the banner, although it was done in the middle of the night. The banner was placed on the planned spot after all. Community reactions were still rare at the time. We received comments occasionally, like enthusiasm of one person who saw the banner while going to work in the morning. Through the years of our work, continuous socializing and various events, the community provided more and more feedback and increasingly participated in our events.

We believe that coming out is required for empowerment of the community, and in order to get to the coming out stage, we must empower one another on a daily basis by getting together and exchanging experiences, in safe spaces, through learning and solidarity. We believe that LGBTI organisations can be of key importance for bringing the community together and building of the movement