The International Queer Film Festival Merlinka, which was organised for the fifth time this year, holds a special place and importance in the work of Sarajevo Open Centre. On this occasion, Kristina Ljevak, winner of the Sarajevo Open Centre’s award for the support to LGBTI persons for 2016 writes about Merlinka 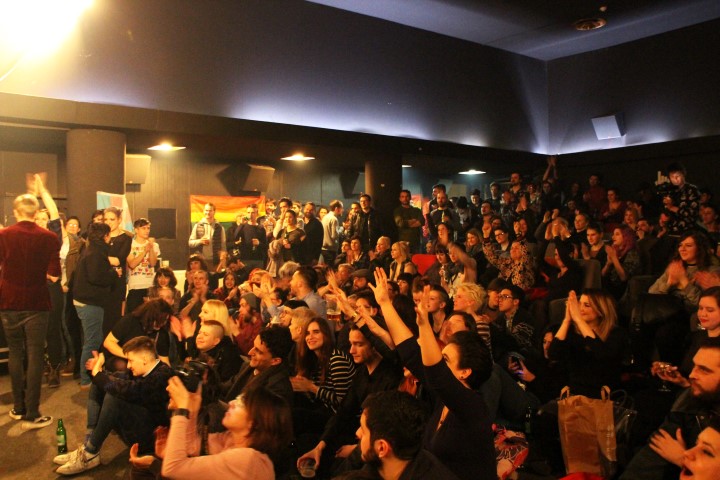 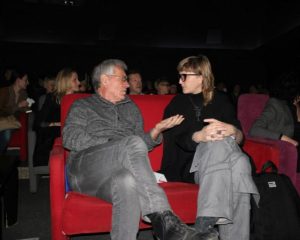 When we grow old and start wondering how we spent our youth, the answer will be: on protests, peaceful walks, small unofficial prides… In places where we tried to point to the fact that LGBTI rights are a part of universal human rights and that privileges and freedoms are not meant solely for the majority to enjoy. The opportunity to draw the attention to disempowerment of LGBTI persons in the society in somewhat more conventional and ‘non-street’ sense through popular culture was an excellent choice. The International LGBT Film Festival Merlinka came into existence in that spirit in Sarajevo, in March 2013, i.e. it became brother-sister festival to Belgrade Merlinka which was established in 2009.

We believed that messages of engaged films and theatre plays, discussions and tribunes would reach the wider, non-activist audience group, and that once their attention has been drawn to the LGBTI battle, they would feel invited to participate in it. It was important to present films dealing with LGBTI topics that were almost never included in festival programs. The festival was named after a murdered trans person, Vjeran Miladinović Merlinka, who acted in Želimir Žilnik’s film Marble Ass. This film opened the first festival, both in Belgrade and in Sarajevo, four years later.

At the time when Merlinka was launched in Sarajevo and organised by the Sarajevo Open Centre, my professional engagement was linked with an overly ambitious idea about approximation of culture and human rights in the early morning program of the Public Broadcasting Service of Bosnia and Herzegovina. I was editing the morning program at 7 a.m. on Fridays, and at the same time I was hosting members of the Sarajevo Open Centre on Federal TV and BHT1 and announcing the festival. I eventually hosted Želimir Žilnik, feeling privileged as an activist because I had the chance to speak to him early in the morning.

With the projection of Marble Ass film, talking to the directors Jasmila Žbanić and Žilnik, with joy and confetti, the first Merlinka was opened in the Art cinema Kriterion in Sarajevo. That night and in the days to come, the small space of freedom helped us feel as we lived in a different Sarajevo or BiH in general, in a city where the audience had the chance to socialise after non-mainstream films, and same-sex partners could hug or kiss without fear. We believed or at least wanted to believe that the first Merlinka was also the beginning of a new, more open and more relaxed path in the fight for LGBTI rights.

We are against the oppressors

Apart from qualitative aspect owing to the experience from previous Merlinka, the second Merlinka in 2014 was not supposed to bring anything new or different. It was supposed to be just another festival in a row, except that it did not include parading in toilets bet a feeling of personal and political accountability which, along with the art, attracted people to its programs. 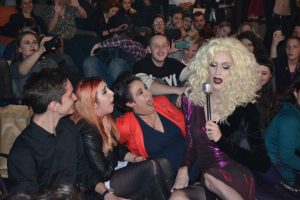 The second Merlinka was attacked by people wearing masks and it brought the fear back. The attackers interrupted the panel discussion on transgender persons in the Art Cinema Kriterion on 1 February 2014, injured the participants and conveyed the message that nothing important and good would happen yet, until more people gather around the idea of freedom and equality, among other things. Even years later, I am still unable to forget the feeling of defeat and helplessness, and fear which excluded all rational things, including solidarity, and the need for survival and shelter when a few of us sought refuge in Kriterion’s storage room dominated. 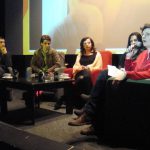 As I was leaving Kriterion, I remember that I passed by a restaurant where they had a wedding ceremony, and people were dancing the traditional dance, in accordance with the old custom. With good reason, I perceived the wedding and folk iconography as symbols of heteropatriarchy, which will likely never leave space not to support, but at least to understand things that go beyond its framework.

The news that the program was not cancelled, but that it would continue on the day following the attack was encouraging. The next festival evening witnessed one of the most touching moments in our activist history in Sarajevo, when we all started singing the Ay, Carmela song performed by Darko Rundek – We are against the oppressors / and their helpers / legionaries and fascists.

The second Merlinka (2014) was stopped and then resumed because of masked attackers who physically attacked the festival participants during the panel on transgender persons. Although the festival had been announced to the police, they were not securing the event. The festival continued with strong anti-fascist messages and support from the part of BiH citizens who are aware of the problem.

There is no return, we can only move forward – this was the unspoken vow with which we welcomed the next Merlinka festivals and small triumphs of freedom. And some parliament sessions where somebody for the first time spoke about things that delegates had not wanted to listen before. We also welcomed those who only came to support the festival after the attack, and not during the regular program, because they reasonably assumed that there would be no cameras to record it.

But all these things are expected in a country where a lot is implied, but very little is actually done. It is important to note that, although they were notified, the police did not secure the second Merlinka, and the attackers have not been prosecuted to date.

The third Merlinka which took place in late January and early February 2015 was marked by the memory of the traumatic incident from the previous year, and the decision that such experience must not repeat itself. There were no attacks this time, and the festival was secured by the police and the security agency. Knowing that one cannot watch films without police forces any more is certainly not encouraging or cheerful.

The fourth Merlinka was a genuine triumph of activism and I remember when I wrote a text entitled http://www.lgbti.ba/ If life were Merlinka for the LGBTI.ba portal. I still think and believe that things would be better for all of us in such case, and that overall improvement of the attitude towards human rights would contribute to personal growth and development, regardless of the sexual orientation, gender identity and other attributes.

I remember that Predrag Azdejković, founder of Merlinka and long-time friend of the Sarajevo Open Centre told me at the time: ‘The curse of all our countries is that things move very slowly and barely, but they still do, and I see some progress. I primarily see many young and brave people who see Merlinka as a free space where they feel safe and watch good and high-quality films. Although this film festival primarily promotes culture and art of the LGBT community, Merlinka is also an important political act, and this is what it should always be. I wish that the minister of culture and sports of BiH opened Merlinka festival next year, because this is a cultural event and it should be supported by the cultural institutions in BiH.’ For a minister of culture to open the festival, there should be a state-level ministry of culture first, and hopefully we will see both happen one day. 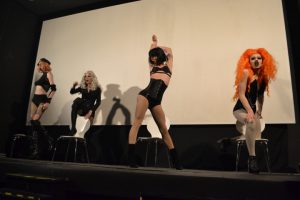 We welcomed the fifth Merlinka in the end of January 2017 with the slogan ‘Merlinka is for everyone.’ It took place without fear from attacks, and hopefully the majority perceives it now as a part of the regular cultural offer in Sarajevo. Launching of the festival an all levels, primarily on the symbolical one is also a part of the debt towards people from the past, who risked their own lives in order to live own freedom and promote the highest human values. As it was the case at the opening of the already famous first Merlinka in Sarajevo, when an ‘honest homage was paid to Merlinka’s courage, charm, freedom’, as Jasmina Čaušević, program coordinator of Sarajevo Open Centre put it at the time.

The fourth (2016) and fifth Merlinkas (2017) attracted the largest number of visitors. The fourth one finished with the performance of excellent Le Zbor group members who collectively played the antifascist musical repertoire. Apart from the top film program, the fifth Merlinka hosted the House of Flamingo and their spectacular drag show.

The last, fifth Merlinka which was held in January 2017 in Sarajevo was visited by over 500 people. Maybe this number is not of special importance in some other environments, but in our domestic circumstances, it is commendable even for mainstream events. And as colleague Azem Kurtić said – everyone who wants to be free and who thinks that love is love came to the festival.

Merlinka 2017 was also recognized as ‘the freest one’, and as such, it gave additional impetus to activist efforts that are equally numerous as the obstacles. For the community and freedom admirers, the arrival of the queer art group House of Flamingo from Zagreb to the last LGBTI film festival in Sarajevo was priceless. Through drag as the creative and emancipating valve of a kind, House of Flamingo offered more than the Sarajevo audience expected.

Merlinka is not only an important activist act and a platform for activities targeting those who understand less or do not want to understand the Other and Different. It is an important link to everything that we do not experience ourselves, regardless how open we are. I remember how precious it was for me to see the film The mask you live at the fourth Merlinka, along with several other excellent films. It is a film which researches masculinities as concepts and norms connected with our stereotypical ideal of a man, and explains to us the consequences of deviations from the dominant patterns of male behaviour. Men or boys who are unable to fulfil the tasks that are expected from them become wounded men who again wound others. ‘We must expel the man from our heads and place him in our hearts’, says one of the heroes of a film which shows us confessions of abusers and victims, pedagogues, psychologists and therapists, but also of young men who under different circumstances became aware of the need not to be a part of the dominant mould and not to represent masculinity in the way in which it is usually expected. Such films should not only be a part of Merlinka’s program, but also of regular elementary school classes, in order to try and prevent that the feelings of rejection and personal frustration turn into intolerance one day.

Many things were presented and promoted as culture in this land of tears. It was ‘short-winded’ at times, without leaving any social trace. The experience of Merlinka and the fact that we built it undoubtedly will be remembered, at least in the collective activist awareness, as one of the best things that the art enabled us to do.