The Beginnings of the LGBTIQ Story

The tenth anniversary of Sarajevo Open Centre, and especially of programs relating to LGBTIQ culture and activism, created an opportunity for Amar Bašić, former member of Q Association and co-founder of Logos Association to recall the path, ups and downs of LGBTIQ activism in BiH. Today, Amar works as a public relations officer, professional translator and occasional LGBTIQ activist, and here he writes about the importance and contribution of Sarajevo Open Centre to LGBTIQ activism in BiH.

Since I believe that the story about results and achievements of Sarajevo Open Centre gains its genuine depth and meaning only when viewed in the context of the LGBTIQ activism in general, with reference to the “ancient beginnings” and past experiences, I went through the rich archive materials stored somewhere on Google servers, in the electronic wastelands of my inbox. I call it “rich” because, with great pride, I see myself as a member of the first generation of LGBTIQ activists in BiH, and also because I have not developed the habit of deleting emails.

This first generation, i.e. a few of us who decided to stay in Bosnia and Herzegovina, remember the times when we worked deeply underground in early 2000’s, when Internet forums, house parties, informal “gathering places” and a few dark zones for cruising were the only forms of self-organisation and the only scenes. Going out into the public in any serious form seemed unthinkable. The media mostly bypassed LGBTIQ topics as irrelevant, and even when they were given space, the idea was to “confirm” the bias and to reduce the story about LGBTIQ persons to a spectacle, soapbox, kitsch, freak show or an otiose manifestation of western propaganda which threatens the tradition and morality of local society. A few photos photo from the largest gay pride at the time in Rio was published here and there, showing an exhibitionist dancer probably wearing the least amount of clothes ever seen by that time. Clearly, the intention was to remind the pious crowd why it is good that we do not have such parades.

The first indications of change and of concrete activist organising were seen in February 2004, when the Association Q for the promotion and protection of culture, identity and human rights of queer persons was formally founded. The initial shy campaigns and actions started, mostly strictly anonymous and practically invisible. The first “official” parties were organised in public places – those were closed parties with strict guest lists at the entrance and stickers to be placed on lenses of the revolutionary-at-the-time cell phones with cameras. Nevertheless, event these shy steps were leading us to some kind of continuity, and from 2007 we started organising regular parties twice a month. In 2005, Logos Association was established, with the intention to question deviations from hetero-patriarchal normative system through the prism of religion, spirituality and interreligious dialogue.

This early activism was a kind of a patchwork – with a little theory, community, come research, little bit of art, and some religion. Often incoherent, more often self-confident, and most often inexperienced, we believed that things could only get better. Associations increasingly went public, attendance of events covering LGBTIQ topics recorded a steady growth, and journalist writings slowly transitioned towards rudimentary understanding of the broader context of rights and needs of LGBTIQ persons. Among all these developments, I barely noticed the invitation for submission of papers for the book about queer theory, activism and culture in April 2008, which was prepared by the Sarajevo Open Centre, which was practically unknown at the time, and the far better known Queer Zagreb Festival. That is when I started perceiving SOC on a small, but seemingly established activist scene. However, all eyes were on the first announced and serious public LGBTIQ event in Sarajevo at the time – the Queer Sarajevo Festival.

I think that there is no need to explain in how many ways the QSF represented a turning point for the activism and position of the LGBTIQ community in BiH. The zest and optimism were replaced by shock and fear. We felt the crushing rage of the homophobic society to the full. For the first time, messages like “die faggots” and pseudoscientific homophobic “arguments” could be seen on public transportation stops. Organisers of the festival were cluttered with threats. The mailing list of Q Association was hacked several times. Reality check came as the strongest slap. The stopped QSF revealed all shortfalls and weaknesses of activist organisation and work at the time, and the community itself slid back to underground work. 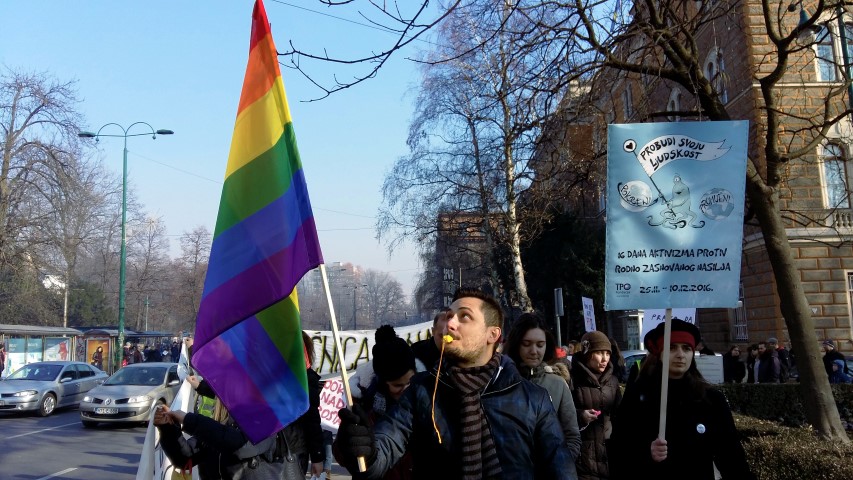 Rising from the darkness

The unfortunate termination of QSF showed that despite the horrifying violence, there were still citizens in BiH society who were willing to go out into the street and stand for and on behalf of their LGBTIQ fellow citizens. However, without clear guidance and direction within the community, the support initiatives gradually subsided, and the Sarajevo scene fell into the darkness where it would stay for almost two years. In 2009, Q Association tried to revive the messages and ideas of QSF through the QSF in-a-box project. From today’s distance, it is hard not to notice the irony of packing QSF in a box, in between the “four walls” of a kind, just like the entire community practically went back into the closet. From my very subjective perspective, the community existed less during this period than in 2004, which made us fear that the defeat could be even worse than we had thought initially.

In my memory, the initiative from July 2010, when the Sarajevo Open Centre invited us to the “First summer gay party” in Podroom club with the intention to make such parties a regular event on every first Thursday of a month is recorded as the essential kick which eventually woke up the traumatized community. I remember superficially the bitter flavour in my mouth because of the determinant “first” in the title of the event. But this was our reality after the QSF. We had to star all over again, and build new foundations and new optimism with new people and new ideas. For the second time, as a community, we had to make insecure steps and get out of the absolute darkness.

The new “first” invitation to the party included the unavoidable note that registration with a name or nickname was mandatory. In the spirit of the cautious, the first ones for the second time, but still very symbolical steps, the party theme was “disco night”. However, it was already obvious that things would not be the same this time. In October 2010, invitations were sent to the premiere of a short documentary entitled To je naše dijete (“It is our child”), directed by Elma Islamović, about four LGBT persons from Bosnia and Herzegovina. After the projection, organisers announced a discussion on “How to proceed with the queer movement in BiH”, which was evidently essential. This was the first event within the new program of Sarajevo Open Centre called “Questioning – LGBTIQ culture, art and rights.” Apart from the note saying that the event would be closed for the media for security reasons, the invitation also included an encouraging sentence: “We sincerely look forward to your attendance, and hope that in this way we will start a new period in the development of the queer community in BiH.”

The community gets closer together

The parties continued in December 2010, with guest performance of lesbian-feminist choir Le Zbor from Zagreb. This time, “Le Zbor Gay Lollipop Party” took place in Fis Kultura club, which would become one of the central places of Sarajevo LGBTIQ scene in the following years. In the end of 2010, Q Association announced the beginning of its inactive status. By that time, Logos Association also disappeared from the activist map, allowing the Sarajevo Open Centre to take the full lead of the LGBTIQ movement in BiH.

In May 2011, Sarajevo Open Centre launched a movie cycle “Sex, Pop and Politics” with regular public projections of non-hetero-normative films in the Art Cinema Kriterion. Publishing activity, promotions, discussions and a systematic approach to advocacy were intensified. After 2011, we witnessed some serious work with representatives of institutions and political parties, media and journalists for the first time, aiming at changing of the approaches and creating a more positive environment through education. This resulted in a radical turn in media reporting on LGBTIQ topics. Sensationalism became a rare phenomenon, whereas the scientifically based and legally specified terms and interpretations assumed primacy in media contents.

Politicians and parliamentarians came forward for the first time, providing unambiguous support to LGBTIQ citizens and significantly contributing to the improvement of the social position of LGBTIQ community. LGBTIQ topics were discussed in parliaments and governmental institutions. There were allies in the public space, which made public activities significantly better than before.

Apart from these activities, the parties were still organises on a regular basis, which is why they became accepted by the community and were organised independently from the Sarajevo Open Centre. It was interesting to observe the transition over a mere ten-year period, from parties that implied fear, lists, stickers and secret locations to those that were organised within regular club programs, openly and without lists, crowded with people and accepted as a legitimate part of Sarajevo’s nightlife. All of this resulted in drawing the community closer together, which is an important precondition for any kind of activism.

Back to the street

With Sarajevo Open Centre, the LGBTIQ activism finally came out of the closet in a serious way. This time, the homophobic violence against participants of the International Queer Film Festival Merlinka in 2014 did not mean capitulation and return to the silence. The Festival continued, and this year marked its fifth edition Response to violence included mobilisation of capacities, of the community, social and media support. This time we stood tall and unwavering. The experience, lessons learned, new leadership and new energy enabled us to publicly confront cantonal institutions in 2017 and tell them that we would not let anyone sabotage our walks and street actions. A protest we organised as a response to the prevention of the march was the first public, announced, unambiguously LGBTIQ event on the street after 2008. And it felt wonderful to wave rainbow flags in the park behind the BiH Presidency building.

When I think about activities of the Sarajevo Open Centre, I put it in the very context of the new, more systematic, better organised and more democratic approach, and of awareness of prior experiences, mistakes and lessons learned. In the past ten years, ‘maladies’ that, unfortunately, often affect the non-governmental sector, such as the personality cult or neglecting of own base were overcome.

For all these reasons, I think that tribute should be paid to the generation which infused LGBTIQ activism with the necessary seriousness and professionalism after the QSF. I will forgivingly say that – with all the positive things that we did in the previous years – maybe organisations that preceded the Sarajevo Open Centre were supposed to be the milk teeth and an introduction to a more thorough and more comprehensive approach that we have today. Naturally, these milk teeth had to fall out, but they are worth mentioning from time to time, because the story of activism would not be complete without them. Also, we should clearly emphasize that the current approach and capacity of activism and the achieved results constitute a brand new, significant and successful treasure which guarantees continuity – so that we never go back to the silence again.