The Sarajevo Open Centre is one of the few organisations simultaneously dealing with the rights of LGBTI persons and women’s human rights. What connects these two programs is Feminism as a clear political action in our organisational profile. In addition to feminism as an organisational value, in the last ten years, we have also realized numerous feminist programs and activities, believing that the same phenomenon is at the core of problem women and LGBTI persons face: relentless patriarchy and its satellite – hetero/cisnormativity. This proved to be a hit in the dead centre since the participants of our feminist educational activities became advocates for the rights of LGBTI persons, and vice versa 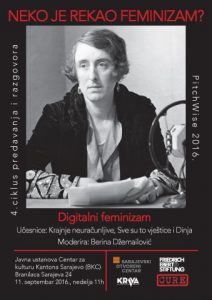 Until recently, no one in the BiH society attempted to make the topics of pornography, hip-hop, Yugoslavian film, sevdah, digital world and the left-wing part of public discussions and conversation from a feminist perspective. Following the completion of Žarana Papić Women’s Studies in BiH, the termination of Gender Studies at the University of Sarajevo, there was no more space for new generations, and the older ones, desiring Feminism, to socialize, gather, express solidarity and learn how to empower themselves, but also get the possibility to hit patriarchy where it hurts the most: in the public sphere. In the past couple of years, we tried to change that.

In March 2013, Sarajevo Open Centre began organising lectures and discussions related to Feminist topics, women’s rights and different questions of gender. The title of this cycle of lectures and public discussions refers to the well-known collection of Feminist texts called Somebody Said Feminism? How Feminism Affected the Women of the 21st Century which was edited by Adriana Zaharijević in 2012, and whose fourth edition also included texts from Bosnia and Herzegovina. The fifth cycle is currently being held, with 35 sessions of lectures and discussions held so far in Sarajevo, and also in Banja Luka. The idea which started it all was connected with opening a space to articulate critical critical review of various topics, primarily from a Feminist position. The lectures are intended for all people interested in different review policies, and the lectures are conceived in a way that after 60-minute introduction of the topic, there is space for questions and the unfolding of a debate. Some of the topics so far were connected to workers’ and social rights, critique of militarism, war rape, the ideological specter and gender issues in the political life in BiH, eroticism in Yugoslavian film, Women’s Antifascist Front of BiH, ideology and language, challenges of Feminism today, Feminist criticism of political economics, the relationship between Feminism and right-wing, women’s reproductive rights, Feminist readings of the life of women in the countryside, pornography, poverty… Lecturers were individuals from the academic community, younger and more experienced activists, artists from BiH and the region. We fondly remember one of the most visited discussion with women using social networks and the digital space for their Feminist activities. Marina, Hana and Dinja seduced, enchanted and make the audience laugh during the Pitchwise Festival in 2016.

“The cycles of lectures called ‘Somebody Said Feminism?’ create a great story and they are my favourite activity by SOC. This cycle created a space for discussing not only current Feminist topics, but also the important questions and issues which influence our daily lives, and which previously had not been in the focus of discussions in the public sphere. The diversity of topics, and the great number of lecturers, thus also a diversity of perspectives, is what gives special attributes to these cycles. I really felt privileged to be part of this story. However, in addition to the great lectures and discussions which I like to look at again in recordings, listen to or recommend to others, there is another important detail of what happens before and after the events. Namely, every lecture is an opportunity to meet, hang out, create some new ideas and talk; about those ‘important’, but also those less ‘important’ topics.”
Amila Ždralović, a lecturer at the cycle Somebody Said Feminism?

In the mid 1990s in Bosnia and Herzegovina, academic workers and theoreticians, with the help of organisations dealing with women’s rights started informal education and courses with Feminist agenda. The non-governmental organisation Women to Women started the project “Žarana Papić Women’s Studies in BiH” which was envisaged as a two-semester course which would introduce the participants with the main ideas of Women’s Studies. The International Forum Bosna, in cooperation with feminists opens the Centre for Gender Research (2002), offering numerous programs and workshops, and organising academic debates. The result of these debates was the special edition of the International Forum Bosna magazine dedicated to Feminism The Challenges of Feminism in 2004, edited by Jasminka Babić-Avdispahić, Jasna Bakšić-Muftić, Marina Katnić-Bakaršić and Nirman Moranjak-Bamburać. The quality of these programs is also witnessed by the fact that the associates for both were women professors from the University of Sarajevo, who would, in the academic year 2006/2007 also start the Master Studies program of Gender Studies within the Centre for Interdisciplinary Post-Graduate Studies at the University of Sarajevo.

About the Žarana Papić School of Feminism

“For me, the Žarana Papić School of Feminism is one of the best ways of informal education I’ve ever had. There is a wide range of useful and interesting topics and modules, excellent lecturers, connections with other people of the same point of view, and all with the purpose of achieving noble goals – these are the most important things this school offers to me.”
Matej Vrebac, third generation participant at the Žarana Papić School of Feminism