A Platform for Political Leadership

In 2015, the Friedrich Ebert Foundation and the Sarajevo Open Centre started the Equality Academy with the intention to create a new platform for political leadership and space for joint actions of representatives, leaders of political parties and civil society organisations. Find out more about the work and success of the Equality Academy which recently saw its third generation of students

The idea of starting the Equality Academy, a platform for political leadership and space for joint actions of delegates, councilors, representatives of political parties, counsellors to ministers and mayors as well as civil society organisations, was born towards the end of 2014 during a meeting with Saša Gavrić, then executive manager of the Sarajevo Open Centre and Merima Ejubović, science associate at the Friedrich Ebert Foundation – BiH Office. The Equality Academy started its program already in May 2015, and recently its third generation of students completed their studies.

The goals of the Academy were clear from the beginning: strengthening the capacities of political leaders in the area of gender equality and equality policies of underprivileged groups in Bosnia and Herzegovina, in order to enhance rights of citizens in Bosnia and Herzegovina and strengthening the cooperation between decision makers and representatives of civil society organisations in BiH

With a great wish to put women rights on the political agenda, and seeing that for such a change one needs partnership and action with the representatives of the government, at the beginning of 2015, we started devising the program for the first Equality Academy. The goals of the Academy were clear from the beginning: strengthening the capacities of political leaders in the area of gender equality and equality policies of underprivileged groups in Bosnia and Herzegovina, in order to enhance rights of citizens in Bosnia and Herzegovina and strengthening the cooperation between decision makers and representatives of civil society organisations in BiH.

We were hoping that the announcement of the beginning of our Academy would rouse the interest of the public and that we would accept a lot of interesting applications. But we came to understand the reality of the situation only when the first applications started coming in. For every open call for the Equality Academy we received over one hundred applications, and, unfortunately, we had to turn down many of them due to the restricted number of participants. The Equality Academy soon became a recognizable event standing out from other events due to its quality, the innovations it brings to the BiH human rights scene and the composition of participants. This also made the Sarajevo Open Centre and the Friedrich Ebert Foundation recognizable. Everyone wanted to take part, to teach, to contribute. Our phone lines, faxes and emails were red hot, and diplomates wanted to take part in welcoming the participants at the opening of the Equality Academy.

The first and second generations of participants at the Equality Academy consisted of parliamentary representatives at the cantonal, entity and state level; members of political bodies within parliamentary political parties; counsellors to leaders of political parties and ministers at the cantonal, entity and state level, who were interested in strengthening their own capacities and working on identifying and implementing concrete solutions to improve gender equality and the position of underprivileged groups in our society. The first two generations included participants from all parliamentary political parties, which saw the Academy as a space for breaking down barriers between parties, joint learning, discussion and exchange of opinion and experience, finding joint solutions and the space to form new partnerships and friendships. The program included three modules in which different topics were discussed. As a reward for excellent grades and behavior in class, the first two generations went on a study visit to Zagreb within which they had the opportunity to visit the Parliament of Croatia, the Office of the Gender Equality Ombudsperson, the Human Rights House Zagreb and the Ministry of Foreign and European Affairs. The focus of the study visit was to understand the processes which lead to the accession of this country to the European Union, and to become acquainted with the work of the institutions of the Republic of Croatia in the area of gender equality.

In the previous two years (generations 2015 and 2016), the participants listened to topics about the political system in Bosnia and Herzegovina, the reforms ahead of us in the process of EU integrations, what gender equality looks like within the Dayton Peace Accords, the election process, gender equality policies, feminism, the representation of women in patriarchal models (“woman, mother, queen”), public policies treating gender equality, the Istanbul Convention and violence against women, finance and public budgets, gender sensitive budgeting, an increased participation of women in the legislative and executive branch of power, Gender Action Plan of BiH and its implementation at the level of the BiH entities and FBiH cantons, and there was also some talk about the human rights of LGBTI persons. During the program, they met the representatives of non-governmental organisations in BiH dealing with the issues of gender equality, but they also practiced their presentation skills with the help of Duška Jurišić who has been moderating each module for the past three years, and who has made each of the modules special with her dedicated engagement, starting discussions and arousing interest among the participants. There was never lack of discussion, and they often continued during coffee breaks, after dinner, even staying up until late at night, and some of them would even spice up their morning coffee with a discussion from the previous day. Since the first-generation group from the Equality Academy showed huge interest and willingness for change, it is not surprising that a follow up activity was organised, with the intention to achieve real gender equality within the bodies of executive power. 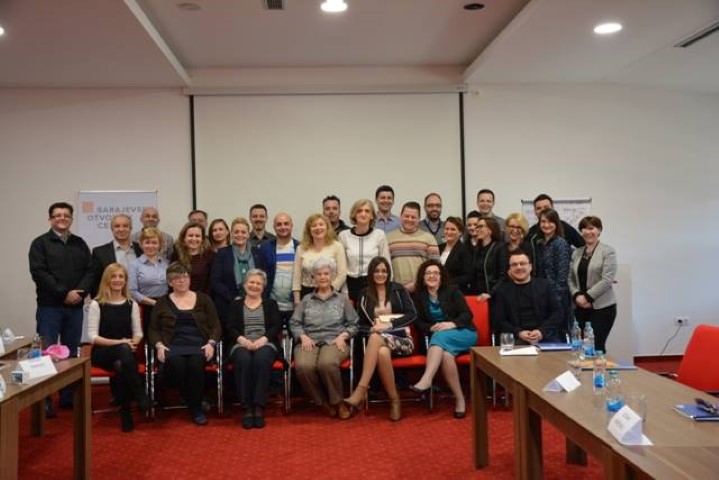 Since the first-generation group from the Equality Academy showed huge interest and willingness for change, it is not surprising that a follow up activity was organised, with the intention to achieve real gender equality within the bodies of executive power

The third generation of the Equality Academy, generation 2017, was comprised of councillors of municipality/city councils in BiH; municipality mayors in BIH and members of political parties in BiH, interested in strengthening their own capacities and working on identifying and implementing concrete solutions to improve gender equality and the underprivileged groups in their local communities and broader society. This generation of participants is fresh out of the Academy. As part of their program, the participants listened to topics about what we have achieved so far and what’s in store for us with current policies regarding gender equality in BiH, on the Gender Equality Law in BiH, the Gender Action Plan, the election process, feminism, human rights of LGBTI persons, observing women through the looking glass of patriarchy, the role of man in accomplishing real gender equality, gender sensitive budgeting and gender sensitive policies adapted to local levels of government. This generation also learnt about gender analysis and practiced its application to concrete issues, but also tested their prejudices and stereotypes within the live library and conversation with a lesbian, gay man and a bisexual person. The greatest success, as was the case with the previous two generations, was the presentation skills workshop, where participants practiced their media presentation, and simulated a talk show.

The good reputation following the Equality Academy would not be heard this far if there were not for experienced and interesting lecturers who selflessly shared their knowledge and experience with our participants. We tried hard to bring the most prominent experts from BiH and the region for every area we considered, and they were: Adis Arapović, manager, Centre for Civil Initiatives; Emina Abrahamsdotter, feminist and activist; Irena Hadžiabdić, Central Election Commission BiH; Gordana Sobol, SDP Croatia; Adnan Kadribašić, expert in gender equality; Danijela Majstorović, professor at the Banja Luka University; Sonja Lokar, expert in gender equality from Slovenia; Karolina Leaković, SDP Croatia; Samra Filipović-Hadžiabdić, manager of the Agency for Gender Equality of BiH; Jasminka Džumhur, the Institution of the Human Rights Ombudsman BiH; Natalija Petrić, Ministry of Family, Youth and Sports in Republika Srpska; Svetlana Cenić, economist; Jelena Milinović, PhD in social studies in the interdisciplinary field of gender studies and head of the department for coordination, education and cooperation in the Gender Centre in Republika Srpska; Mirjana Lukač, manager of the Gender Centre in Republika Srpska; Duška Jurišić, journalist; Saša Gavrić, executive manager of the Sarajevo Open Centre; Kika Babić-Svetlin, expert advisor for planning, developing and monitoring the GAP BiH within the Agency for Gender Equality in BiH; Ismeta Dervoz, delegate in the House of Representatives in the Parliamentary Assembly of BiH with the mandate 2010–2014; Sandra Zlotrg, executive manager of the Association Lingvisti; Jasmina Čaušević, program coordinator for the Sarajevo Open Centre; Ilija Trninić, executive manager of the organisation Perpetuum mobile; Dženita Hrelja Hasečić, expert for gender sensitive budgeting; Gordan Bosanac from the Centre for Peace Studies in Zagreb; Sabina Ćudić, delegate of the Canton Sarajevo Assembly and coordinator of the F5 Initiative; Mersida Mešetović, Colonel at the Armed Forces of BiH; Meliha Lekić, professor at the Faculty of Medicine at the Sarajevo University; Aida Spahić, feminist, activist and MA in gender studies; Vladana Vasić, manager for advocating at the Sarajevo Open Centre; Lejla Somun, expert in gender equality; Azir Mrđanović, expert in gender equality; Elmaja Bavčić, feminist, activist and MA in gender studies; Faruk Hujić, expert in finance and gender sensitive budgeting. 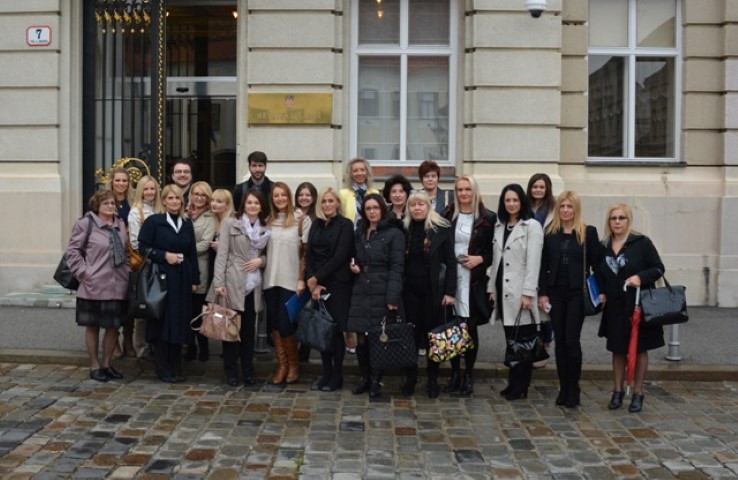 The Equality Academy and the contacts that came from it created numerous positive effects: cooperation with parliamentary commissions for gender equality, Initiative for introducing gender sensitive language in the Parliament of FBiH, suggestion for solving the issue of non-existing institutional mechanisms for gender equality in FBiH cantons, preventing the adoption of the amendments to the Law on Protection against Domestic Violence in FBiH (which would set back the status of safe houses), suggesting and jointly advocating for the amendments to the Law on the Council of Ministers BiH (introducing the 40% quota), suggesting and jointly advocating for the amendments to the Election Law (introducing the 50% quota for election lists). In addition, the Academy participants publicly read the drama Seven, thus raising their voice against gender based violence. The greatest contribution of the Academy is honest friendship and partnership that were created, the knowledge the participants acquired, who became honest advocates for change in our society, fighters for human rights, our dear allies who stand by us in protests and react individually on violations of human rights of women and LGBTI persons. We are particularly proud of them for often contacting us on their own to agree what to work on next with joined forces.