KNOWLEDGE PRODUCTION – From Publishing to Exhibition

During the entire period of existence of Sarajevo Open Centre, we researched and wrote about the political system, work of the institutions, discrimination, historical, cultural and social issues concerning women and rights of LGBTI persons. With such knowledge production, we improved feminist and human rights debates in the public discourse of Bosnia and Herzegovina. These are some of our activities that contribute to culture, publicist writing and art in BiH in the context of (women’s and LGBTI) human rights Since its foundation, the Sarajevo Open Centre is known for intense research and publishing activities. However, this is not all. Everything we document, research, analyse and publish becomes the basis for our further advocacy work. We honestly believe that our knowledge production contributes to social changes in the right way. 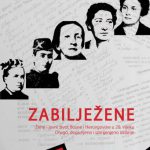 Since 2011, we have published Questioning edition, which includes books and other publications thematising issues of gender, sex, and sexuality, through policies that deconstruct patriarchy and hetero-normativity. Since 2012, we have published various titles in the Gender edition dealing with: gender as a sociologically and culturally conditioned difference between men and women, which is primarily produced by norms, practices, customs and traditions, and changes with time; the phenomena and persons that deny, overcome, question and criticise this narrow binary division; and the breakdown of gender and different social categories such as feminism, security, politics, art, history, everyday life, leadership etc. Since 2012, BH politics edition has questioned and analysed the political system and performance of our state institutions. In Human Rights edition, we have published different reports, texts and publications concerning human rights of women, lesbians, gay, bisexual, transgender and intersex persons. Human Rights Papers edition offers short, focused and thematic reports, policy papers and analyses of human rights situation in Bosnia and Herzegovina, and of the development of human rights in the international context to both international and domestic audience. 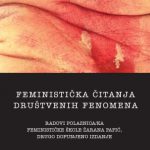 Through these two editions – Human Rights and Human Rights Papers – with collected concrete data and analysis, we managed to provide visibility to problems that women and LGBTI people are facing in the BiH society and to offer concrete solutions for them, from guidelines to concrete proposals for legal solutions and public policies.

When the Sarajevo Open Centre started working in 2007, it also started collecting materials for a library. Since then, the library has grown progressively and over 1000 titles have been collected so far, mostly thanks to individual donations and through purchase, but the library is also enriched by own editions. 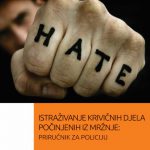 Also, the Library and documentation department of the Human Rights Centre in Sarajevo received rich and contemporary material that was obtained by the Sarajevo Open Centre in 2013. The joint initiative of SOC and the Centre was focused on the establishment of a study division called ‘LGBT corner’ at the Centre’s library. Such study division enables users to find material dealing with the broad area of LGBT culture and rights in one place, in the LGBT studies/Queer studies section. 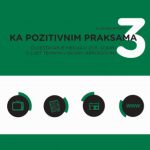 What makes our library unique is the literature concerning lesbians, gays, bisexual, transgender, transsexual, intersexual and queer persons, and the community in general, i.e. people who are almost invisible in the public space, and these publications aim to explain to the citizens the problems, needs, rights and culture of people whose lives disrupt the assumed social values and normativity.

Multiannual companionship and cooperation with the Museum of Literature and Performing Arts of Bosnia and Herzegovina reached its peak through the organisation of three exhibitions about three great women from BiH’s cultural history. 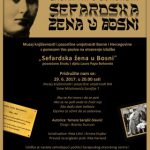 In November 2016, an exhibition was organised about the founder of this Museum entitled Razija Handžić’s Poetry and Museum: confiscation of memory and systematic neglecting of women’s contribution to culture, science and institutions. In March 2017, an exhibition about writer Nafija Sarajlić – RISE UP, WOMAN! Europeanisation & Emancipation: case of Nafija Sarajlić – sketches and themes was organised, and an exhibition about Laura Papo Bohoreta Sephardi woman in Bosnia was set up in June 2017. The work on exhibitions is an attempt to correct the gender injustice of systematic neglect of women’s contribution to BiH culture, science, art and society.

The cooperation in the domain of art was even broader. With the Association for Culture and Art CRVENA, we organised the exhibition My house is your house in October 2014. This exhibition questioned the ‘ossified’ discourses of domination and power and represented the space for contemplation about everyday life and society through emancipation foundations of the common and the political. The exhibition focused on the issues some of which were solved de jure through feminist and women’s fight, but not de facto: unpaid work, housework, care for family, and violence against women, and they remain in the centre of women’s fight. 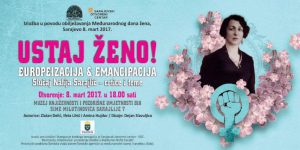 Direct work with the community also implied translating of everyday lives of lesbians, gays, bisexual and transgender persons into art, thus providing general public with access to authentic stories and experiences of these people. In 2013, on the occasion of the International Coming Out Day, we opened the Masks are for the closet exhibition. The exhibition comprised of masks placed in the room and in the closet, photographs of persons, intimate notes about feelings of people who hide their identities, and closets where visitors could enter at the exhibition opening and feel the hiding claustrophobia through audio recordings. After that, the same year in December, the Invisible everyday life exhibition by Irfan Redžović and Vedad Divović depicted persons who wanted to share moments from their everyday lives with the public: from their workplaces, places where they socialize to their homes. By publicly presenting segments from lives of people who defy the implied binary social systems of our culture with their everyday lives, we wanted to contribute to the principle which says that human rights should not be selective and that everyone should be equal when it comes to the enjoyment of human rights and the responsibility attached to such enjoyment.

Publications Women who love women and 18+ gave voice to the community which rarely or never gets the chance to speak about growing up, first loves, sex, living together and partner relationships. This is probably why they had several editions.