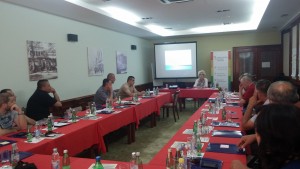 As a part of the project „Fighting Hate Crime in BiH“, financed by the Permanent Mission of the Kingdom of The Netherlands to the OSCE in Vienna and implemented by Sarajevo Open Centre in partnership with OSCE Mission in BiH, a training was held for police officers of Hercegovačko-neretvanski Canton on bias motivated crimes and predjudice as a motive of these crimes.

Training for the improvement of the capacity of police officers was held on 10th of June in Mostar. The goal of education was to present participants with cases of bias motivated crimes that could help them in their future work in prevention and fight against bias motivated crimes.

During the training, police officers learned about the prejudice as a motivation of hate crimes; the legislative framework and regulation of hate crime in BiH; importance of research and prosecution of bias motivated crimes, and modalities of successful prosecution. Participants pointed out that the training contributed to their understanding of bias motivated crimes and negative messages this type of crimes carries, but also the importance of the positive message carried by the proper prosecution punishment of perpetrators, as well as adequate and timely reaction of state institutions regarding hate crimes, which are usually focused on LGBT persons, Roma and returnee communities in the context of Bosnia and Herzegovina.