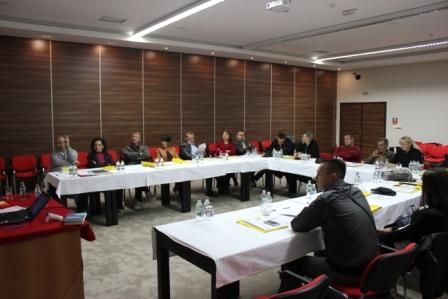 The first education on hate crimes based on sexual orientation and gender identity for the community police officers of Canton Sarajevo took place in Konjic, hotel Garden City, on 23 and 24 September, 2013, as a part of Coming out! Advocating promotion and protection of LGBT rights, financed by European Union, implemented by Heinrich Böll Foundation, together with partner organisations Sarajevo Open Centre and CURE Foundation.

The goal of this training is to sensitize police officers to the problems of LGBT persons and the need to fully implement and protect the human rights of LGBT persons in Bosnia and Herzegovina.

First day of the training was focused on presentations and practical exercices about terminology related to sexual orientation and gender identity used in national legal regulation, and raising awareness on the prejudice and stereotypes towards LGBT persons through open and interactive methods, which were followed by interesting dialogue and discussion.

On the second day of training, after presentations aimed at: better understanding of the characteristics of hate crimes, concrete criminal offences in Federation of BiH motivated by prejudice based on sexual orientation and gender identity, as well as at the guidelines in the treatment of victims of such crimes, participants practiced through role plays and work in groups concepts presented so they could easier apply this gained knowledge. Besides, participants shared their experiences and obstacles they face while working with LGBT persons and they emphasized the importance of the position of prosecutors in the qualification of the crimes committed.

Training was opened by Emina Bošnjak, one of the coordinators of the project Coming Out! Advocating promotion and protection of LGBT rights and the inspector Josip Bilandžija from the Office of the Police Commissioner. Welcome speeches were made ​​by representatives of Cabinet of the Minister of Internal Affairs of Canton Sarajevo: Mensur Bašić and prof. Dr. Hana Korač, who emphasized that hate crimes motivated by hatred based on sexual orientation and gender identity, especially in cases involving violence, should have an important place in criminal investigations of all police agencies. Police officers from Sarajevo Canton in performing everyday tasks are confronted also with crimes that are motivated by prejudice against a particular population and they comply with applicable local and international regulations and documents. Obligations of Bosnia and Herzegovina and the lower levels of government is to implement the recommendations of the Council of Europe on measures to combat discrimination based on sexual orientation and gender identity .

Trainers of this training were experts from the area of hate crimes and human rights of LGBT persons as well as activists from the region and BiH: Saša Gavrić, Saša Bojanić, Sanja Juras, Vladana Vasić i Slobodanka Dekić.