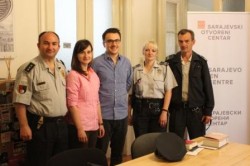 As a part of Coming out! Advocating promotion and protection of LGBT rights, financed by European Union, implemented by Heinrich Böll Foundation, together with partner organisations Sarajevo Open Centre and CURE Foundation, Sarajevo Open Centre proudly announces the first ever training for the police officers of Canton Sarajevo on hate crime – criminal acts on the grounds of sexual orientation and gender identity, which will take place on 23 and 24 September in Konjic. The goal of this training is to sensitize police officers to the problems of LGBT persons and the need to fully implement and protect the human rights of LGBT persons in Bosnia and Herzegovina.

This training represents a new step in cooperation of Sarajevo Open Centre with the Ministry of Interior of Canton Sarajevo. We would like to remind, that as a part of joint efforts to build trust between LGBT persons and police officers, Ministry of Interior of Canton Sarajevo  in cooperation with Sarajevo Open Centre, has put posters in all police stations in Canton, which encourage LGBT persons to report violations of their human rights and that the police is there to protect all citizens, regardless of their sexual orientation and gender identity. In the past period, Ministry of Interior of Canton Sarajevo and the Office of the Police Commissioner of CS have showed a high level of cooperation, which resulted in a first informal education of police officers on the protection of LGBT human rights in Bosnia and Herzegovina.

During the open and interactive two-day training, twenty police officers will have the chance to learn more about the terminology related to sexual orientation and gender identity, to work on diminishing the prejudice and sterotypes against LGBT persons, and adopt a more sensitized approach to the LGBT persons who have been subjected to hate crimes on the grounds of sexual orientation and gender identity and how to treat those victims.

Facilitators of the training are the experts in the field of hate crime and the human rights of LGBT persons as well as the LGBT activists from BiH and the region: Saša Gavrić, Saša Bojanić, Sanja Juras, Vladana Vasić i Slobodanka Dekić.