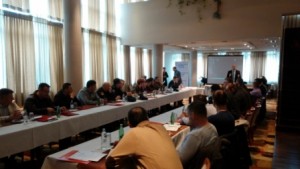 As a part of the project „Fighting Hate Crime in BiH“, financed by Permanent Mission of the Kingdom of The Netherlands to the OSCE in Vienna and implemented by Sarajevo Open Centre in partnership with OSCE Mission in BiH, a training was held for police officers of Zeničko-Dobojski Canton on bias motivated crimes and predjudice as a motive of these crimes.

Training for the improvement of the capacity of police officers was held on 25th of March in Zenica. The goal of education was to present participants with cases of bias motivated crimes that could help them in their future work in prevention and fight against bias motivated crimes.

Training consisted of theoretical lectures and examples from practice. Police officers were lectured by domestic experts who are dealing with bias motivated crimes. During the training, police officers learned about the importance of research and prosecution of bias motivated crimes, during the session held by Zekerija Mujkanović, Chief Prosecutor of Prosecutors office of BD.

The legislative framework and regulation of Hate Crime in BiH were also discussed. This session was held by Amra Hamidović from OSCE Mission to BiH. Participants also had the opportunity to learn who to recognize bias motivated crimes and what are modalities of successful prosecution. Participants were guided by Marija Lučić-Ćatić, professor on Faculty of Criminology and Security studies University of Sarajevo. Working day was completed with the group work, where police officers worked on the analysis of case studies and then also presented it.

Thirty one police officers of Zeničko-Dobojski Canton participated in the education.