In the early days, Sarajevo Open Centre mostly organised cultural activities, especially film screenings and literary events. Dina Vilić, a SOC member from the very start, goes back to the very beginnings of the organisation. Although now in charge of finance, she began her career at SOC by running the film and literature program. It was an interesting job that saw her do everything from hand-delivering invitations like a proper postwoman to clubbing.

A chilly October, year 2010. Arijana, Hana, Saša and I decided liquor was the best way to keep warm.

“Dina, how would you feel working for SOC?”, Saša asked, as we were strolling by the river. “You could help us out with film screenings and similar stuff.”

“Serbian Orthodox Church”, Saša quipped. “Sarajevo Open Centre. Arijana would give you tasks to do. We still don’t have an office. You’d work part-time.”

I have so many memories from the early days of SOC, when we roamed from project to project, dipping our toes into everything from culture and religion, to politics and LGBTI issues

So began my SOC career: at a pub, with toasts all around. I’d head to town to work on my master’s thesis. Arijana would usually check in before 12. We organised film weeks – European Documentary Film Week, Slovenian Film Week, Spanish Film Week, Hungarian Film Week, Francophone Film Week – and tried to tour different parts of the country. We travelled to Tuzla, Bugojno, Zvornik, Banja Luka, Zenica, Goražde, Istočno Sarajevo, Gračanica, Bihać, Trebinje… We made posters and flyers, program announcements, sent copies of films to all of these towns. Since we wanted to enable foreigners to also attend screenings, we translated everything into both BCS and English. The subtitled films would arrive by bus from Banja Luka in the evening. I’d usually wait at the bus station with my dad who, unbeknownst to him, had become SOC’s first volunteer, or the first driver.

In 2011, after the unfortunate and completely unnecessary commotion surrounding the 2008 Queer Sarajevo Festival, Saša and I decided to screen a short documentary film about LGBT people called To je naše dijete by director Elma Islamović. We were a little bit scared of the outcome. We decided not to publicise anything in the media, but we still had to send out invitations. At least 600 of them. We had enough money to mail only half of them by post. The rest had to be hand-delivered on foot, from one institution to the next. It fell upon me to be the postwoman. That’s how I got to know every single street in Sarajevo. Of course, someone had to write out 600 addresses on the envelopes. I took care of the 300 envelopes that I hand-delivered, while my mother filled out the other 300, thereby becoming, unbeknownst to her, SOC’s second volunteer.

The screening was a hit. The Meeting Point cinema was packed full. We even had to bring in additional chairs. There were no incidents. We came up with a new idea: Sex, Pop and Politics – a series of LGBTI-themed films. Screenings would take place once a month. We’d start in Sarajevo, and then we’d see. However, the catchy title caught attention in other places and we were asked to organise screenings in smaller towns. So we sent the films. Thinking that the people knew what the films were about, since the flyers also featured a brief synopsis, we were pleasantly surprised and beyond thrilled. After one of the screenings, we got a call from the director of the cinema in Zenica. Laughing over the phone, he said: “What on Earth was that film?! I had an audience of mostly older ladies, they almost had a stroke!” This didn’t dampen our enthusiasm, so we continued with the screenings until, after adopting a strategic plan, we gave up on the cultural program altogether (which coincided with the closure of museums in Sarajevo). However, we did start cooperating with Merlinka Festival, bringing it to Sarajevo in 2013. 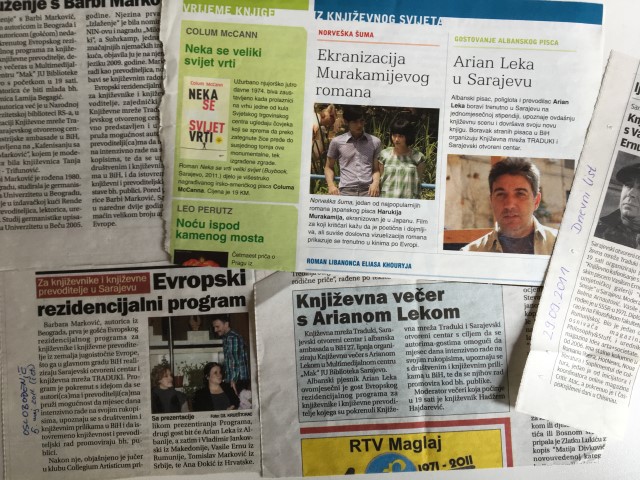 In 2011, after a year at the organisation, I got news from Saša: “We finally have an office!” By office he meant the apartment he and Arijana shared. The office was in the dining area, next to the kitchen. “If you get hungry, help yourself. Here are the keys to the apartment. You could come at 10 and work until 2 p.m.” Art Cinema Kriterion opened right around that time, so we relocated our film screenings from Kinoteka to Kriterion. The films attracted a large audience both in Sarajevo and other places. We were constantly asked to organise screenings in smaller towns as well. We were more than willing to oblige, so we’d send them copies of the films. I had already learned how to fill out a payment slip, pay invoices, contract fees and taxes. I was constantly on the phone with managers of the cinemas, reminding them to send us the invoices. We soon moved into the realm of the absurd: there I was begging them to send an invoice so we could pay the rental fee. I’d tell them we’d be in trouble if we didn’t pay. At one point, I got the following response: “You see, we don’t care about material things, only spiritual nourishment!”

In 2011, together with Traduki Network for Literature we organised a Writers-in-Residence program, hosting writers from East Europe in Sarajevo for a month, giving them the opportunity to write and present their work to local audiences. The program became very popular and we were soon joined by Goethe Institute in Sarajevo, the Austrian Embassy in BiH and the Goga publishing house from Slovenia.

My first task was to take our first guest Barbi Marković to Banja Luka for a book event. My biggest fear was misplacing one of the receipts, because all of the cash was in my bag: for food, transportation, housing and monthly stipend. At the end of the month I handed the receipts and the leftover money to Saša. But all my efforts were in vain as one day I handed over 300 BAM extra. At home I counted the money again. My mom, dad and brother all did the counting. The next day at work, I counted the money with Saša. Still, there was a surplus of 300 BAM. To this day I have no idea how we ended up with that much surplus money!

An End of an Era

Month by month, the writers came and went. Most of them liked Sarajevo. I got to hang out with them, more or less – it depended on how busy they were. We organised a lunch with every writer so we could get to know them and talk about the readings. I have so many memories from the early days of SOC, when we roamed from project to project, dipping our toes into everything from culture and religion, to politics and LGBTI issues. A memorable moment was the arrival of Vasile Ernu from Romania. He barely spoke English but was fluent in Russian and Romanian. None of us could speak the two languages. The three of us were sitting in a restaurant, trying to communicate in whatever way we could, flapping our arms about. We must have looked possessed. Nevertheless, we managed to sort everything out.

Arian Leka from Albania loved the Sarajevo mornings. I helped Daša Drndić buy wine, olives and cheese for her guests. We cut the cheese up and prepared a small buffet. I explored the nightlife of Sarajevo with young writer Daniela Chmelik. We continued our cooperation with Ana Đokić who came back a year later to work with school and pre-school children. We were especially thrilled to see Sarajevo Open Centre mentioned in the thank you note in her book, the one she’d been working on in Sarajevo. Tomislav Marković, the voice of dissidents, described his experiences in Sarajevo in the magazine e-novine. Emma Braslavsky was thrilled with the ritual of mid-afternoon coffee drinking. As I tried to explain the difficult financial situation of most people in BiH, she asked: “How come you have money for coffee?” I thought about it long and hard, but I never came up with a good answer.

The program ended in December 2012. We ended the film screenings that same year. We moved away from culture and focused on LGBTI and feminist issues, and I turned to other “literary” genres, those that had to do with crunching the numbers, instead of explaining the world.