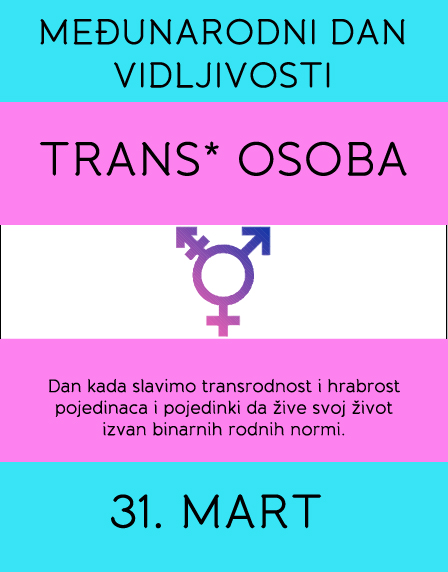 „To those who are gay, lesbian, bisexual or transgender-let me say- you are not alone. You’re struggle, for the end to violence and discrimination is a shared struggle. Today, I stand with you. And I call upon all countries and people, to stand with you too. “ – Ban Ki Moon

International Trans* Day of visibility, March 31 is the day when we celebrate transgender (trans*) people and their courage to live their authentic lives, out of the binary gender norms. On this day we celebrate those who were strong enough and brave to be who they are, despite all the hardships that comes with coming out as a trans* person.

Sarajevo Open Centre has been working with trans* people in BiH for couple of years now, but also by gathering experiences from the region in order to improve its work. This year, our work efforts will be oriented towards advocating for changing legal and medical procedures regarding transgender people in BiH, as well as to empowering trans* community in BiH.

As trans* people are largely invisible, they often lack support on many levels. Trans* people are exposed to severe stigmatization, discrimination and violence more than other groups. Their basic human rights are usually violated; such as right to privacy, human dignity, body integrity, life free of violence, right to proper medical care, the right to marriage and the list could go on.

The lives of successful trans* people that we tend to see on TV (Dana International, Laverne Cox, Andrew Pejic or Chaz Bono) are only a minor part of the colourful trans* community.

The question -how those who are less successful or living of the margins of the society live everyday lives – remains unanswered.

The level of violence, stigmatization, unemployment, inability to change documents, lack of financial resources for medical procedures, lack of safety in the public space, the prosecution of hate crimes towards trans * people and poverty, are rarely or never the striking news.

That is why Trans* visibility day is important. To stand up, and show that we exist.

Trans* community faces very little understanding in BiH society but also from the LGB community itself. As if we are forgetting that, it is a trans woman – Sylvia Rivera who was the first one, to stand against the police in 1968 in front of the Stonewall Inn, and that she was greatly advocating for the rights of gays and lesbians.

Although Day of Trans* Visibility has been celebrated only recently, trans* people have always been present in our society – around us, in our neighbourhood, in school, in college, in our family.

March 31 is the newest date in the LGBTI+ calendar. Rachel Crandall, an activist for the rights of transgender people launched the celebration of this date in 2009, because apart from November 20 that marks International Trans* Remembrance Day when we remember those trans* people who have lost their lives due to hate crimes, there are no dates in the LGBTI+ calendar that celebrates trans* people and trans* community in all its diversity.

What can you do today?