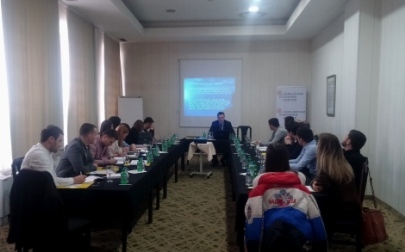 As a part of the project „Fighting Hate Crime in BiH“, financed by the Permanent Mission of the Kingdom of The Netherlands to the OSCE in Vienna and implemented by Sarajevo Open Centre in partnership with OSCE Mission in BiH, education was held for apprentices of prosecutor’s offices and courts on the subject of bias motivated crimes.

The training took place on the 25th and 26th of January in Sarajevo. During the training, the apprentices had the opportunity to learn about the concept, the legislative framework and international standards related to this type of criminal offenses, and with concrete examples from practice on the basis of which they could hear how prosecutor’s office and courts in BiH conduct investigations and make convictions for these types of crime.

Apprentices emphasized that this topic is very important since incidents and bias motivated crimes are powerful destabilizing factor in any society, and that in formal education they did not have the opportunity to hear about it. They also emphasized, that training has helped them distinguish legal terms and legal regulation in Bosnia and Herzegovina when it comes to the bias motivated crimes. They feel that this education is of great help to them in their future careers.