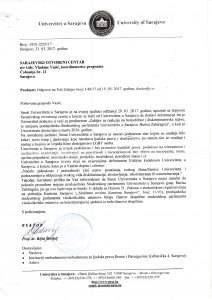 Regarding the letter Sarajevo Open Centre had sent to the University of Sarajevo, asking for reaction to the homophobic and transphobic statements of the, at the time, president of Student Parliament UNSA, Haris Zahiragić, the University Senate, on its session on 29 March 2017, took the unique attitude in which it condemns any public outburst and action that violates human rights and dignity, and it condemns the statements that insult personal dignity of LGBT persons. In the same letter it was emphasized that the University of Sarajevo has always supported and promoted human rights, encouraged tolerance and respect, insisting on righteousness and equality, no matter the national, racial, sexual affiliation, property status, origin, disability, family status etc.

The Senate proved its dedication to these ideals 8 months later, during its election session on 29 November 2017, by appointing no other than Haris Zahiragić to the University of Sarajevo Steering Committee, based on the Decision of the Student Parliament UNSA on the selection of its member – representative of the students.

By doing this, the Senate showed its dedication to righteousness, its encouragement of tolerance and human rights promotion, as well as its dedication to interests of students who, in March 2016, after the first public statements of Haris Zahiragić, in high numbers, reacted by asking for University’s answer and clear protection of human rights of all students. The University neglected the complaints of its students and civil society, stamp out its views, Ethical Codex and laws of BiH.

The University of Sarajevo clearly manifested its homophobic and transphobic face, and it no longer takes effort to hide the fact that the whole human rights protection story is not more than empty talk. The University confirms this by untimely, soft and hidden from the public, reaction and condemnation of homophobia and transphobia of Fahira Fejzić Čengić, professor at the Faculty of Political Science who expresses her views and attitudes in textbooks that are being used in teaching. The University also ignored Sarajevo Open Centre’s suggestion, from 27 April 2017, to hold a meeting and talk about the possibility of its staff’s sensitization on human rights of LGBTI persons, with whom they obviously have issues. In the end, the University cemented its undoing and ignorance by appointing Haris Zahiragić to its Steering Committee.