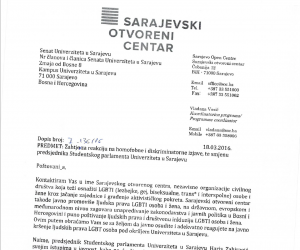 Regarding the decision to not hold nor schedule lectures and/or exams during congregational Friday Muslim prayer on the University of Sarajevo faculties, which also takes into account the central weekly congregational prayers for Catholic and Orthodox, as well as students of other religious denominations during the planning of academic year

We hope that the Senate will also address the large number of complaints submitted by students regarding the discrimination and hate speech, prohibited by the same legal documents and norms that served for the aforementioned Senate’s decision. Concretely, we are referring to Article 9 of the European Convention on Human Rights, BiH Anti-Discrimination Law, BiH Law on Gender Equality, Framework Law on Higher Education in Bosnia and Herzegovina, and Canton Sarajevo Law on Higher Education.

In March 2016, after several homophobic, transphobic and discriminatory statements given by Haris Zahiragić, the president of the Students Parliament, a great number of students of all faculties in Sarajevo, as well as Sarajevo Open Centre, addressed this issue to the Rectorate and the Senate, demanding reaction to public violation of LGBTI human rights. The Senate never reacted.

Yesterday’s decision of the Senate, brought in accordance with “long-lasting commitment to the respect all human rights, equality and fight against all forms of discrimination” is a clear sign to us that the University of Sarajevo’s Senate is ready to condemn homophobic, transphobic and discriminatory attacks by the students’ representatives, and give support to all lesbians, gay men, bisexual, transgender, and intersex students at the University of Sarajevo, that this university body respects and safeguards the interests of all its students. We expect that the Senate will finally have a discussion on the students’ complaints related to hate speech towards LGBTI people, as it just did with the requests to protect the human rights of students who are practicing believers.

After this decision, and University of Sarajevo’s clear commitment to inclusive education, protection of human rights, and promotion of tolerance, further silence on hate speech and incitement to discrimination by Haris Zahiragić would be highly hypocritical. It would also be inconsistent with the principles the Senate used to argument its decision, and the fact is that the University of Sarajevo’s Senate cannot have that luxury.