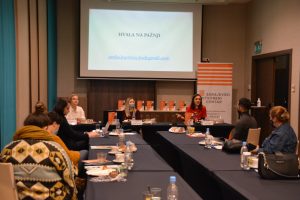 At the round table, we raised questions, found solutions, discussed and planned our future activities in this field. Introductory speeches during the round table were given by Amila Kurtović, author of the handbook, and Ena Bavčić, on behalf of the Organising Committee of the BiH Pride March. The round table was moderated by Vladana Vasić from the Sarajevo Open Centre.

Research on restrictive practices focused on the practice of the competent authorities, namely the ministries of interior of the cantons of the Federation of BiH, Republika Srpska and the Police of the Brčko District of BiH, as well as other participants in Bosnia and Herzegovina who have the opportunity to decide on exercising the right to freedom of peaceful assembly (e.g., ministries of transport, municipal bodies and private persons). This research also included the valuable experience of public assembly organisers from across Bosnia and Herzegovina, which served as a guideline for the preparation of this document.

The results of comparative research on the legal framework for freedom of assembly in BiH were also used as an additional reference.

The round table is being held within the project “Improving access to freedom of assembly in Bosnia and Herzegovina” implemented by the Sarajevo Open Centre and financially supported by the Matra Fund of the Embassy of the Kingdom of the Netherlands.