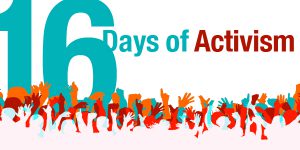 During the last twenty-four years, the global 16 Days of Activism Against Gender-based Violence Campaign has been dedicated to advocacy and coordinating the work of support to ending gender-based violence on local and international level. The Campaign was launched on the first Institute for Global Women Leaders that was organized by the Center for Global Women’s Leadership in 1991 on Rutgers University.

The dates, 25 November (International Day for the Elimination of Violence against Women) and 10 December (Human Rights Day) were chosen in order to emphasize the connection between gender-based violence and the values of human rights, and it was highlighted that gender-based violence is one of the international human rights violations. This 16-day period also emphasizes other important dates, including 29 November, International Human Rights Defenders Day, 1 December, World AIDS Day, 6 December, the day that marks the Montreal massacre (in Canada – The National Day of Remembrance and Action on Violence Against Women, also known as The White Ribbon Day).

The participants of the 16 Days of Activism Campaign include individuals and groups all around the world, and use the human rights framework in advocating for the elimination of all forms of violence against women through awareness-raising activities on local, state, regional and international levels.

Sarajevo Open Centre, as the organization that advocates full respect of human rights and social inclusion of LGBTI (lesbian, gay, bisexual, trans* and intersex) persons and women, joins this campaign, and will implement a number of activities in November and December of 2016.

The program is available here.