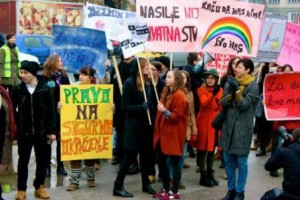 Today, December 10, 2013, in order to celebrate International Human Rights Day, activists and citizens organized a protest march entitled “Human Rights OUTSIDE!” in which around 70 people participated.

Activists headed out from the Fine Arts Academy around 10 am, stopping in front of the Federal Parliament building, crossing Ajfel Bridge, and stopping again in front of the Sarajevo Canton building before arriving at the Parliamentary Assembly of BiH. Activists stopped in front of the legislative building and read their requests, demanding protection of human rights for all, including the right to education, work, and the right to nonviolence. At the last stop – the area in front of the Philosophy Faculty, a little past the BiH Parliament – activists opened up a rainbow flag as a warning that the rights and security of LGBT people are threatened in Bosnian society.

“This march is a unique opportunity to raise your voice, especially for marginalized and vulnerable groups. Today, individuals and organizations spoke out for youth, children, people with disabilities, Roma, returnees, and refugees. A society’s development is best judged by the amount of respect held for marginalized and deprivileged people. Unfortunately, our society is still a few steps behind,” said Nina Seremet, coordinator of the Youth Initiative for Human Rights BiH.

The protest sent a clear message that everyone must unite in order to improve the state of human rights for everyone, without any sort of discrimination.

Today the Ministry of the Interior of the Sarajevo Canton showed a high degree of professionalism in taking all necessary measures to ensure the safety of the citizens that protested. This itself gives hope that institutions and governmental bodies can take a proactive role in the preservation, enhancement, and promotion of human rights for all.