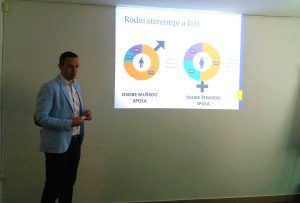 On Saturday, 18 May, the new series of lectures at this year’s Žarana Papić School of Feminism, with the fifth generation of students, took place. In the scope of the Module 2 – State, law, equality: de iure and de facto, Adnan Kadribašić, lawyer, talked about discrimination on grounds of sex, gender, sexual orientation and other circumstances. He, also, talked about the institutionalization of gender equality: gender mainstreaming, gender-responsive budgets, as well as about the, so called, positive measures and quotas. More about the content of the lectures is available in the B/C/S language.