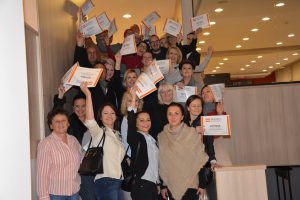 The Friedrich Ebert Foundation and Sarajevo Open Center, by launching the Equality Academy, aimed to create a new platform for political leadership and the space for joint activities of deputy leaders, leaders of political parties and civil society organizations in BiH. The fourth generation of the Equality Academy is intended for the councilors of municipal / city councils of municipalities / cities in BiH, heads and chiefs, advisors and advisers of heads and mayors of municipalities in BiH, and members of political parties who are interested in strengthening their own capacities and working on identifying and implementation of concrete solutions that will improve gender equality and the position of disadvantaged groups in our society. Who are the participants of the fourth generation of the Equality Academy you can find here. The Academy of Equality 2018 had four modules, that started in May, and lasted until November 2018.

The fourth module of the Equality Academy 2018 discussed the following issues:

– Gender equality: from the local community to the European Union;

– How to adequately promote gender equality on social networks?

– Panel Discussion: The role of men in achieving gender equality;

– Realizing the rights of marginalized groups at the local level;

– Resign quotas in laws and regulations at the local level;

Lecturers on this module were prominent female experts for gender equality and human rights from Bosnia and Herzegovina, media expert, communication expert, and representatives of the previous generation of the Equality Academy: Lejla Gacanica, an expert on gender equality ; Sanela Tunović; communications expert; Vladana Vasić, lawyer and manager of the advocacy of the Sarajevo Open Center; Emina Bošnjak, Executive Director of the Sarajevo Open Center; Duška Jurišić, an expert in media and media performances; Dženita Hrelja Hasečić, an expert on gender equality; Ajdin Tinjak, Elvir Bijedić and Mirnes Kurtanović, participants of the Academy of Equality 2017.

The program of the fourth module of the Equality Academy 2018 is available here (BCS only).