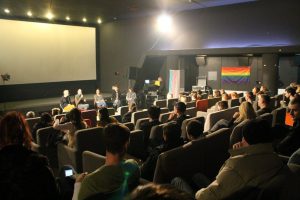 On the second day of Merlinka Festival, held on 28th of January in Art Cinema Kriterion, panel discussion named Our personal is political too was held. Naida Kučukalić was moderating the discussion and participants were Nera Mešinović (activist from B&H), Nina Đurđević (photographer from Croatia) and Marino Sorel i Entity from Croatian queer art group House of Flamingo. Aim of discussion was to answer the questions of coming out in conservative and homophobic society, and in what way individual activism changes the status quo that many LGBT people are forced to accept.

Day earlier, projection of movie Neizgovoreno, directed by Elma Islamović was held within the Merlinka Festival. The movie is a real-life story about lesbian Nera Mešinović and her family. Nera had participated during the last year in many projects of human library where she talked with many people about her sexual orientation. She did almost 500 interviews and during the discussion she shared her experiences. „Human library is big part of me and I enjoy doing it. I have realized that there is real human potential in it, potential that can make a change. It is unbelievable how much can personal story affect other people. If you speak about something that hurt you, people can see your fears, goals, urges and that is the most beautiful thing about it, a fact that personal context can bring the change “, said Nera.

Nera also spoke about reasons why she accepted to participate in this movie since she is well aware in what kind of homophobic environment she lives in. Idea for the film arose after one event in Sarajevo Open Centre where projection of Elma’s first movie Our Child happened. Nera said that she did not think too much whether she should participate in movie or not. Special thing about the movie was that her mother participated in the movie as well. “Before the documentary, my mother did not realize that a lot of parents do not support their LGBT children and she was quite surprised that during the Merlinka Festival she did real activist work since she participated in human library for all of my friends and those who are about to become my friends. I can imagine the hard times I would experience if I did not have her support. I can say I am really privileged and from that privileged position I have the need to support those in LGBT community who are not as lucky as I am. That is the moment where fear or freedom develops. In this case, I was free.”

Nera also touched the topic of fear and said that one kilometer of road she passed with her mother from one cafe to Kriterion Cinema was hardest kilometer in her life. “Fear is present, fear motivates, and in my opinion, that is very positive emotion that reminds me how privileged I am compared to others because that fear is minor compared to those who did not come out even to themselves, let alone others. When I realize how few reasons I have to feel fear, how much support I get from my family and friends and how everybody goes through that experience of fear together with me, it is something nice to share with others.

Photographer Nina Đurđević talked about two series of photographies that also represent certain activist work. First series of photographies is called objekt(iv)na and consists of photographies where Nina exposed her half naked body. She explains that the series was inspired by long distance relationship and requests to send few naked pictures. After some time, Nina realized that she is not making these photos just to send them but that something deeper was occurring. “For years, I had big inferiority complex related to my body, I looked to myself worse than I look today. Today I look fantastic! (laughter) Act of photographing myself and putting the photos on the internet was act of self-liberation. It began from myself, but developed into reaction to the society and position of woman in society, how woman has to be pretty”.

During the Merlinka Festival, series of photographies made by Nina was presented named 17:15. The theme was day to day life of trans* people. When questioned why is the trans* question important to her she replied that the trans* question was never important to her but the question of a human being in general and how we treat each other. “I thought that we put too much focus on all of the things that we are not and that it is the reason why our society is so f***ed up. This series of photographies was inspired by one relationship, where I realized how privileged I am in all of my ordinariness or being normal. I have realized how accepted I am because I never had to think about all of the things that people who are different think about on daily basis, how much that affects your development as a person, and your views. It is horrible if you have to pee and then come across the problem of deciding which toilet room to pick. I wanted to show ordinariness, because I think we are all the same.” Nina would not describe herself as an activist but thinks that the individual experience is the strongest one. “If we talk about activism, I am an individual activist, because with my way of life, views, beliefs and the way I live and work I make a testimony on every step. “

Members of art group House of Flamingo from Zagreb, Marino Sorel and Entity, spoke about the forming of House of Flamingo and what it means todays when man puts on woman’s clothes and wears makeup, since it is still looked upon as a radical act. House of Flamingo was formed in its current form after first DRAGram Festival which was held in Zagreb, three years ago. After gathering the group, House of Flamingo was formed as an homage to the ballroom culture where different houses competed between themselves in different categories of gender nonconforming and exploration of different gender identities, explained Marino. “We are a group of people with really bizarre sense of humor and everything we do is in some form activism, starting from what we wear, our makeup, how we talk to people, material that we produce, etc. There is always a message behind our work. Our work is primarily artistic but has a dose of activism and belief in it as well”, said Marino.

Entity, member of House of Flamingo, who lives freely his/her drag life, said that not everyone is as free as him regarding their drag life but that in his/her case, everyone knows what he/she does and support him/her. “I do not live drag life in my free time. On the stage I am an artist, but if it was not for this opportunity, it is probable that I could not perform everywhere like this. There are not many collectives like House of Flamingo and that is a bit sad because we should all gather together. If someone wants to joins us, feel free”.

In the end, Marino said that their work is aimed equally on hetero and queer audience. “Even in Croatia, where some positive legislative changes happened, it still seems that the community is limited in different forms of binarity, what is male and what is female. For hetero audience, our work comes as a certain moment of education, and for queer audience it is a moment where they can feel free more than what it is usually allowed”. Marino stated that the reason for their visibility comes out of their strong will to move drag performance out of basements and gay clubs where it is invisible. “Our wish is to show people what we do, and by the set of circumstances the story began to grow. We are very pleased that so many different associations and initiatives recognizes what we do and invite us to show everyone what it all looks like”.