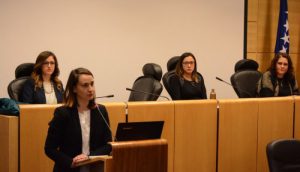 Although there has been, in the previous 20 years, a significant progress in the state of women’s human rights and gender equality, women are still discriminated and in an unequal position. This is especially visible in the area of labour and labour relations. Therefore, on 13 March 2017, in the Parliament of Federation of BiH, Sarajevo Open Centre and the Committee on Gender Equality of the House of Representatives of the FBiH Parliament organised the thematic session: FBiH Labour Law: To protection of motherhood, parenthood and fatherhood through the prism of EU Integration. The goal of the thematic session was to symbolically mark the International Women’s Day, 8 of March, as well as the gender equality week in BiH.

Adrijana Hanušić Bećirović presented the findings of the publication Prijedlog izmjena i dopuna Zakona o radu Federacije BiH (Draft Amendments on Labor Law of the Federation BiH) that aims at offering amendments to the Labour Law that need to be implemented in order to improve the protection of the rights of workers related to motherhood, fatherhood and childcare, as well as to create better conditions for achieving gender equality in family and social life. During her speech, she emphasized that the proposed amendments are answers to social reality in BiH, and the intention of the amendments is to achieve a more favourable environment to found a family. She added that some of the measures are protective in character (from inappropriate questions about family status, marriage and pregnancy plans during job interviews), and some are incentive in character, meaning that the fathers should use parental leave more, in order to gradually change the perceptions on the roles of men and women in realising family life and participating in social life.

Svjetlana Marković presented the findings of the publication Majčinstvo, roditeljstvo i očinstvo i pravo EU (Motherhood, parenthood and fatherhood and EU law) that points to provisions of the Agreement on Functioning of the EU and Fundamental Rights Charter of the EU, as well as to directives that relate to the protection of motherhood, parenthood and fatherhood that should be transferred to legislation of the member states or the ones that want to be members. During her speech, she said that EU requires BiH to guarantee the minimum of rights that relate to parental leave, as well as to maternity benefits that would have to be harmonised in the whole country. Marković said that in some areas BiH is more advanced compared to the EU legislation, especially regarding one-year parental leave, even though this is not actually always respected, so there are situations in which the mothers, facing threats of dismissal, have to return to work after 42 days of mandatory parental leave.

The representative of the Ministry of Labour and Social Policy of Federation BiH, Ernis Imamović, supported the proposed amendments to the Labour Law. He emphasized that the current Law has undergone serious reform and has been adjusted, among others, in the field of protection of women, motherhood/parenthood, but that these amendments can contribute to better quality solutions in the field.

The president of the Committee on Gender Equality, Jasna Duraković, concluded the session by pointing out that the current Labour Law is much better than the previous one, but that there is also space for certain amendments. She added that the last amendments have enabled the father and the mother to have the same right to parental leave, that wasn’t the case previously, but also that the fathers have not used the right that often, and that the practice of equal use of the right by both parents should be a normal and acceptable thing.

The agenda of the thematic session is available on this link (in B/C/S).