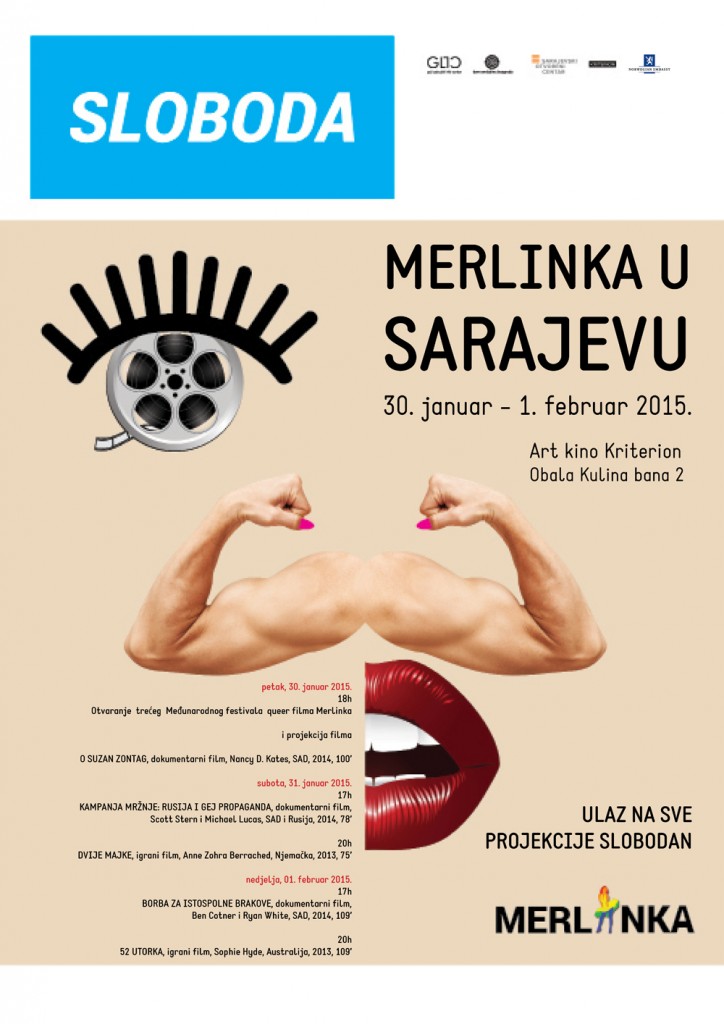 From January 30th until February 1st, Sarajevo Open Centre is organising and hosting the International Festival of Queer Film Merlinka at the Art Cinema Kriterion in Sarajevo. This Festival was organised for the first time six years ago in Belgrade with the goal to promote films tackling LGBT topics. The Festival is named after a murdered trans* person – Vjeran Miladinović Merlinka.

Within the three day Festival programme five feature documentaries and feature films will be shown. Festival will be opened on Friday, January 30th at 6 p.m., with a documentary Regarding Susan Sontag directed by Nancy D. Kates in 2014: This film intimately portrays the life of a woman who has, thanks to their education, passion and activism, become one of the most influential literary, political and feminist icons of her generation. The film depicts the life of Susan Sontag through archival material, experiences of persons close to her, as well as her own words, from her early infatuation with books to the first experience in a gay bar, from an early marriage to her latest lover. Artists who have had the opportunity to work with Susan Sontag in Sarajevo during the war will also share their experiences and memories at the opening.

Two films will be shown on the second day of the Festival. A documentary Campaign of Hate: Russia and Gay Propaganda made in co-production between Russia and the United States in 2014 will be shown at 5 p.m. This film is made as an attempt to depict the situation in Russia, after the legal ban on so-called “gay propaganda” was passed by Russian Parliament in 2013, thus criminalising every form of public discussion on the rights of LGBT people. German film Two mothers directed by Anne Zohra Berrached in 2013 will be shown at 8 p.m. This film is the story of two women who, like many other lesbian couples in Germany, realize that the path to having a child is a lot tougher than they think, since most sperm banks do not provide services to lesbian and gay couples for legal reasons. However, when they finally find a doctor who provides them with the expensive treatments of insemination, they are unable to conceive for several months.

On the third day of the Festival, an American documentary from 2014 The Case Against 8 will be shown at 5 p.m. This film introduces the events behind the scene related to a lawsuit against the State over the ban of same-sex marriages in California. The film shows the experience of the plaintiff and two gay couples whose families were in the centre of same-sex marriage controversy. The Festival will be closed at 8 p.m. with an Australian film 52 Tuesdays from 2013. The film follows the life of a sixteen year old girl that must rapidly become independent after her mother unveils plans to change her gender which limit the time they spend together only to Tuesday afternoons. This film is an emotional story about desires, responsibilities, adaptation and transformation.

After the violent interruption of last year’s Merlinka Festival during the discussion of transexuality, when 14 masked men attacked visitors and guests of the Festival and demolished Art Cinema Kriterion, it is of utmost importance to show that we will not let violence stop us in the struggle for better society and human rights for all! We invite you to come join and support us while hanging out and enjoying great movies.

The Festival is organized in partnership with Embassy of Norway in BiH.

Detailed programme of the film screenings is available on this link.