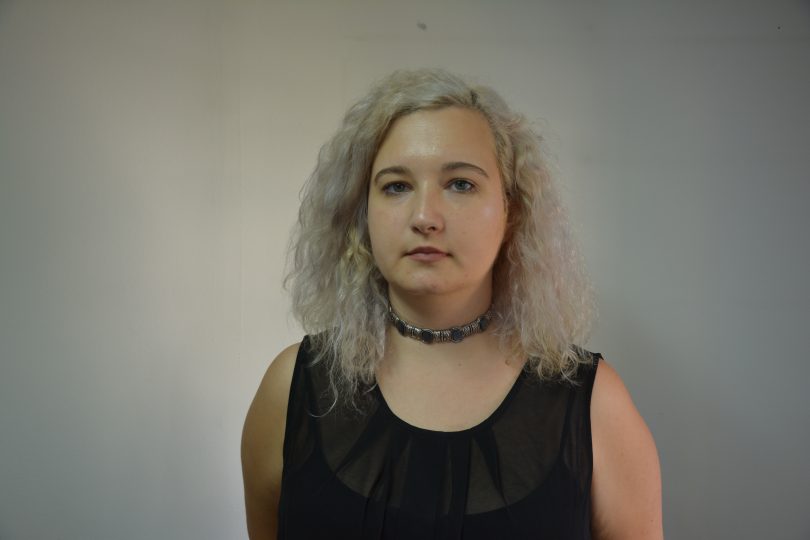 The Foundation of Local Democracy spoke with a representative of Sarajevo Open Center (SOC), the organization which has been changing society through activism for years.

What does it mean to be a Human Rights Defender and how much they deal with discrimination and feelings of insecurity at work and perhaps out of work, Vladana Vasić will tell us.

The Foundation of Local Democracy conducted an analysis of the “Security Network for Human Rights Defenders and Activists Against Gender Based Violence in Bosnia and Herzegovina – Five Case Studies” which, through personal stories of an LGBT community journalist, a Safe House Coordinator, a Police Officer and a War Victims’ Representative explains the problems they encounter on a daily basis.

The analysis provides information on recorded incidents over the past 10 years, analyzes the context, conditions and the system of human rights defenders’ work in BiH, analyzes the protection system in BiH and the countries of the European Union. The analysis offers general recommendations for action to improve the protection of Human Rights Defenders.

This document was made as part of the project “Stay Safe – Security Network for Human Rights Defenders and Activists Against Gender Based Violence in Bosnia and Herzegovina” implemented by the Foundation of Local Democracy in partnership with the “Women’s Police Network” in BiH. The project was financially supported by the Kingdom of the Netherlands through the MATRA program.

Vladana V: So far, we have documented 43 such cases in 2018, which concerned direct online outreach to the LGBTI community, as well as individual LGBTI people and / or activists in BiH.

Vladana V: Members of my family have so far had no problems with discrimination and hate speech due to the fact that I am an LGBTI person who is an activist and publicly speaks about her bisexuality. Since I am working as a legal counsel at the Sarajevo Open Center, however, I can confirm that family members of LGBT persons are very exposed to these types of human rights violations. Of course, a lot less than LGBTI people, but social intolerance is still affecting them.

Vladana V: Over the past three years, the Sarajevo Open Center has unfortunately recorded an increase in domestic violence against LGBTI people, where primary perpetrators of violence are the parents, and brothers and sisters who receive support from the extended family. On the other hand, in our work with LGBTI people and providing psycho-social support, we see an increasing number of parents who support and accept their LGBTI children. It is clear that more and more LGBTI people in BiH are coming out and that their openness regarding sexual orientation, gender identity and / or sexual characteristics leads to negative or positive family  reactions that are becoming more and more noticed.

Vladana V: Me personally, and also my colleagues from SOC, who publicly speak about their identity and advocate for the human rights of LGBTI people are exposed to constant online threats, intimidation and bullying in various ways. Almost every day we receive threatening comments, messages, e-mails that vary from general threats to the LGBTI community in BiH, to very specific threats of violence, rape and murder of team members or even specific people through their personal mails and profiles.

Vladana V: SOC insists on reporting all these threats to the police, specifically to the Ministry of Internal Affairs in Canton Sarajevo and the Federal Ministry of Internal Affairs, in order to encourage these institutions to react. Although the law (apart from Republika Srpska) does not recognize the online threats to LGBTI people as a criminal offense of inciting and encouraging hatred, they can be interpreted as a criminal offense of endangering security in which the Internet is only the media of the perpetration of the criminal offense. In this regard, we believe that the police and the prosecution must be educated in the field of criminal offenses committed through the internet and that these crimes should be viewed not as electronic crime (which has other features), but as ordinary criminal offenses committed through the Internet. It is inconceivable that in the 21st century the police refuse to prosecute criminal offenses because they “do not know” how social networks work.

Vladana V: Our experience in working with the police, but also with prosecutors, are different, in some cases we see progress, while in others we do not see change. We have been working on educating the police and prosecutors since 2015 and we hope that in the next period after the appointment of a contact person for LGBTI human rights in the Cantonal Prosecutor’s Office of Canton Sarajevo, we will be able to see progress.

Vladana V: Society in BiH is still very closed and exclusionary towrads LGBTI citizens. In BiH, according to research conducted by NDI in 2015; 44% of people would get their child treated if they identified as lesbian, gay man, bisexual, transgender or intersex person; 33% would cease to communicate, and 30% tried to cure their friend or neighbour of different sexual orientation, gender identity, and / or sexual characteristics.  Intersex people are subjected immediately to the medical procedures of “normalization” of sex that are painful, repeated during their lifetime, leave severe psychological consequences and are generally not necessary for the health and functioning of the person. In this regard, it is necessary to work on sensitizing and raising awareness of the human rights of LGBTI people and the life of LGBTI citizens in BiH.

Vladana V: If we are talking about a purely theoretical institutional framework, BiH has institutions (a large number of them) that could adequately protect human rights, but what is problematic, unfortunately, is their work in practice and the implementation of their decisions. So, evaluating their work in practice, protection mechanisms in BiH are unfortunately not adequate to protect human rights, there is a lot more need to educate the staff of these institutions, and to work on improving the existing practices and procedures they are working on.

Vladana V: Public awareness can certainly be influenced by the media, through public appearances as activists and conversation about the human rights of LGBTI persons, as well as through giving the right to speak to LGBTI persons in BiH. The media itself can influence it by transmitting the news from BiH, which is show the position of LGBTI people in BiH. The institutions can influence it through support public and equal treatment towards LGBTI people as well as other social groups in BiH.

Vladana V: As an example of positive practice, I would certainly highlight the reporting of media which has changed in the past 10 years from adverse to negative and even affirmative reporting on topics of major importance to human rights of LGBTI people. It is also very important that the media in BiH increased reporting on BiH topics instead of transmitting news from the world, leading to the breaking of the conviction that LGBTI people do not exist in the BiH society.

Also, there are very positive tendencies by BiH institutions to take a step forward and proactively work on the protection of human rights of LGBTI people, both through the creation of an Action Plan for Equality of LGBTI persons in BiH that received a positive opinion of the Government of FBiH and pending further procedure. This decision of the Federation of BiH Government to appoint a working group to work on drafting regulations aimed at regulating same-sex life partnerships in FBiH. Of course, all these processes take a long time and we will still have to advocate for them to see tangible results, but it is commendable that such initiatives are accepted and being talked about in institutions as well as in BiH society.