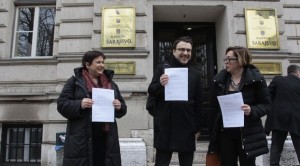 Today, Sarajevo Open Centre, INFOHOUSE and Foundation CURE have required from Canton Sarajevo Assembly the direct application of the Gender Equality Law, which stipulates that the executive branch has to ensure equal gender representation, and generally greater visibility and presence of women in the governments.

Led by the example of colleagues from Zenica, whose actions in the Zenica-Doboj Canton heeded, the representatives of several non-governmental organizations in Sarajevo held a meeting with the Chairman of the Sarajevo Canton Assembly, handing him a letter with the requirements.

Dženana Alađuz, director of the Foundation INFOHOUSE from Sarajevo, in addressing to the media, pointed out that their desire is only to live in a normal society – the one in which all persons have equal rights.

“Only once we’ve had three women ministers, never any Prime Minister, not to speak about how we never reached the magic number of 40 percent. We are not only for procreation, and we are not just for the kitchens, we are smart and capable and it would be about time for those who live off our taxes and votes to admit”, concluded Alađuz, adding that the position of women in BiH is disastrous, and that is, unfortunately, typical representation of women in BiH, where they are facing numerous difficulties, including eg. lack of social assistance and the right for compensation for maternity leave.

Sasa Gavrić, director of Sarajevo Open Centre reminded that the Gender Equality Law provides for the gender distribution of at least 40 percent, and stressed that this Law is a question of civilization, and that its violation is unacceptable.

“There is no reason why women should not be equally represented in politics as men, because they are equally qualified and need to get a piece of the pie that belongs to them, when we talk about the government. The government which is not represented with the relevant number of female Minister can not be legitimate or representative, and there is no reason to ignore half the population”, said Gavrić.

Selma Hadžihalilović, on behalf of the Foundation CURE, invited colleagues from other women’s organizations and women’s network members to come out on the street, in front of their cantons and to call their elected government to take into account women’s voices, issues and policies, saying that women’s issues absolutely must be in focus.

Chairman of the Sarajevo Canton Assembly, after the meeting with representatives of non-governmental organizations, said that he will always come out to meet citizens’ associations “primarily because of the people”.

“I think we need to support the representation of women by 40 per cent and I, as Chairman at this moment, extend the initiative to all the parties that make up the ruling majority and and that will make the government to take into account the fact that the government has to take in mind a relevant number of women”.

A list of candidates for Sarajevo Canton Assembly will be known on Friday, March 6.