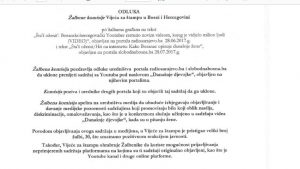 The Complaints Commission of the BiH Press Council, whose members are legal and media experts, on 20 July 2017 adopted the Decision by which it suggested to the web portals radiosarajevo.ba and slobodnabosna.ba to remove the published YouTube video made by the blogger Amir Hadžić, named Today’s Girls, and to, in the future, avoid publishing and giving media attention to contents that promote any kind of violence, discrimination, disdain, as it was, in this case,  done by the video “Today’s Girls”, regarding women. You can find this decision on this link.

Besides Sarajevo Open Centre, 30 more citizens of BiH reacted and complained to the Press Council, requesting that the mentioned video be removed from the web pages of these portals, because it justifies rape and incites violence against women. (http://soc.ba/reagujmo-na-opravdavanje-fizickog-i-seksualnog-nasilja-nad-zenama/)

The editorial boards of both portals removed the video in question, and the Editorial Board of the portal radiosarasevo.ba expressed regret for even conveying the contents that justify sexual and physical violence against women, and expressed their dedication to protection and promotion of human rights.

The fact that concerns is that justification of sexual and physical violence against women is becoming an increasingly pronounced trend in the BH society whose members are young people, men and women. Namely, after the public reaction of Sarajevo Open Centre to publishing the problematic video on these two portals, driven by another video reaction by Amir Hadžić in which he defended his attitudes and claimed that his words were wrongly interpreted, and he called SOC out, a high number of his friends reacted by sending threats, warnings and insults via the Sarajevo Open Centre’s Facebook page and e-mails, defending the expressed views and claiming there is nothing wrong with them, and that Amir Hadžić has just described young women in BiH who, by the way they behave, cause the sexual and physical violence themselves.

What shows that this kind of reaction is not an isolated case, and that in BiH the denial and justification of sexual and physical violence against women is present, is the fact that the administrators of the online feminist Facebook page, Krajnje neuračunljive (https://www.facebook.com/krajnjeneuracunljive/), received sexual and physical violence threats, because of pointing to this problem, about which you can read more in the excellent text published in Školegijum (http://www.skolegijum.ba/tekst/index/1326).

It is clear that this kind of relation of young people toward degradation, sexual and physical violence against women points to a bigger problem of presence of misogyny in all the spheres of Bosnian-Herzegovinian society, that should be solved through the education system, as well as through clear and fast reactions of condemnation and sanction of such behavior.