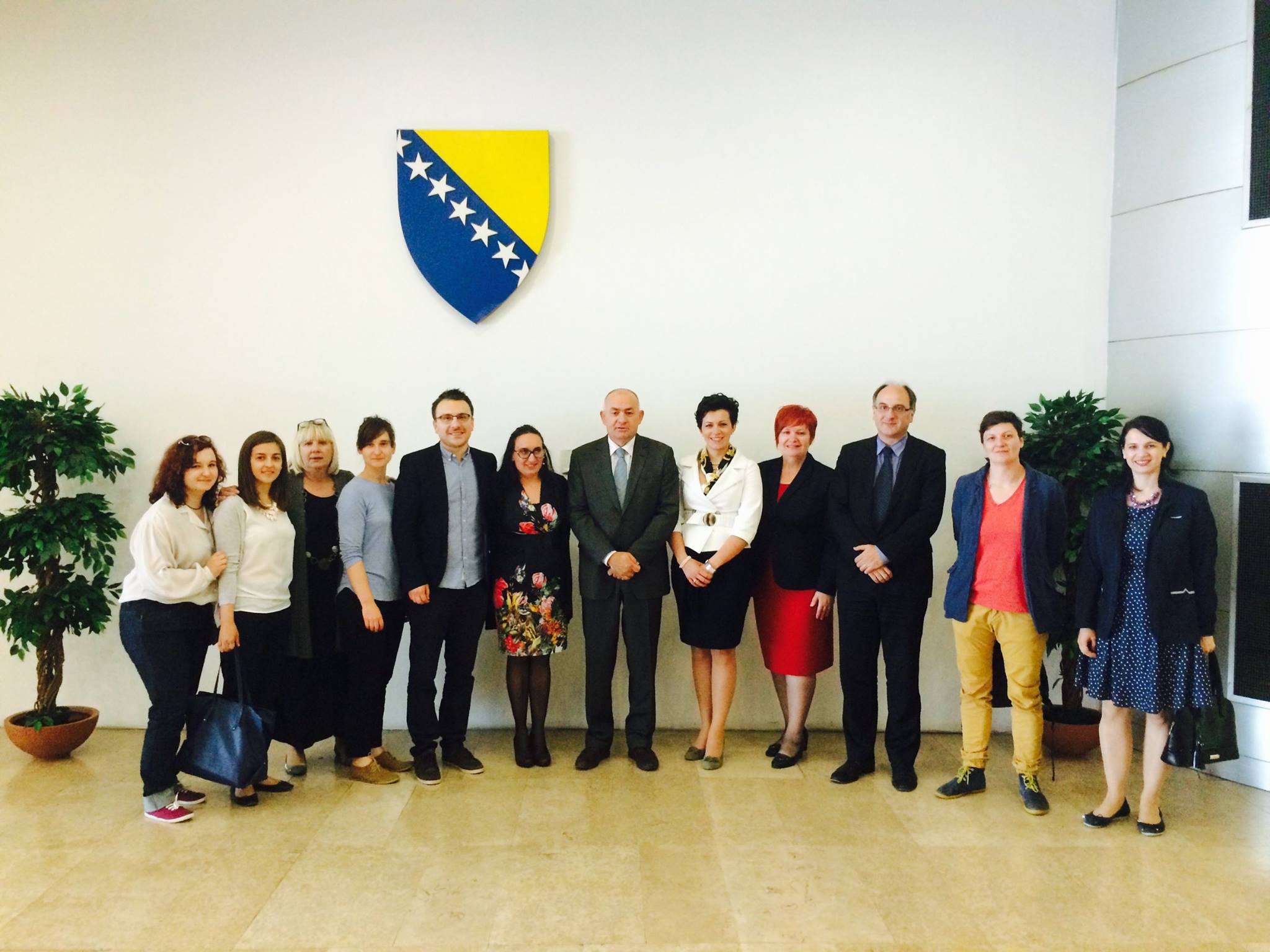 The year 2015 has brought us lot of changes. At the political level, what no one expected has happened: The Stabilization and Association Agreement with the EU entered into force and the European Union has offered a continuation of the integration process although BiH did not provide necessary accomplishments. The formation of the executive authority in the spring of 2015 brought us a larger number of women in executive positions, which is of course by no means satisfactory, but it is a number that gives hope that we can do better. Some parliamentarians have shown their willingness to cooperate with civil society organizations showing that partnerships with us, foreign mercenaries, are possible.

The Parliamentary Assembly of Bosnia and Herzegovina celebrated for the first time, even though there was lots of outcry in the hallways and at coffee breaks, May 17th – International Day Against Homophobia and Transphobia, and so opened the unstoppable path of struggle for equality of lesbian, gay, bisexual, transgender and intersexual (LGBTI ) people through the institutions of government.

Many processes have begun. Some of them also in the wrong direction. Although the results are not immediately visible, changes from 2015 give us hope that 2016 will be the year of real change.

These are the changes and events that await us in this year.

1. MERLINKA IS FOR EVERYONE: LGBT Film Festival for the fourth time in Sarajevo

For us, the activism of the year 2016 begins on 29th and 30th January – perhaps with the smallest, but a very special festival. Sarajevo Open Centre is for the fourth time host of the Belgrade Festival. For the fourth time the Merlinka festival is in Sarajevo. Within the program in addition to interesting movies, we are highlighting the concert of fantastic lesbian-feminist choir LE ZBOR. All people with good intentions are welcome to this celebration of life, love, diversity, but also resistance to violence.

Let’s remember, participants of Merlinka Festival in 2014 were attacked by 12 hooligans, and this attack, like the attack on the Queer Sarajevo Festival in 2008, was never prosecuted. 2016 will certainly be also a year when we will continue the legal battle to prosecute attacks of 2014.

2. The new way of founding and financing of Safe houses: better or worse protection of victims of domestic violence in the Federation of BiH?

With the adoption of the Law on Protection from Domestic Violence FBiH in 2013, the conditions for systemic combat against gender-based violence have been created. Within the Law the Article 35 has also predicted conditions for funding shelters for temporary accommodation of victims of violence. Since the adoption of the Law until now, Federation of BiH has never fulfilled the legal obligation of co-financing of shelters in the amount of 70%. In 2015, the Federal Government has concluded that the provision of Article 35 is not clear. Instead of asking for the interpretation of this provision, the government decided to do changes and amendments of this law. Draft of the Law on Changes and Amendments to the Law on Protection from Domestic Violence of FBiH has been adopted on December 2nd, 2015 at the House of Representatives of PFBiH and then submitted for public discussion. Proposed changes to the law foresee that safe houses must have the status of the institution, and that they will no longer be funded as safe houses, but will receive the support per accommodated victim, and the federal government itself will determine the price of accommodation. Sarajevo Open Centre, Medica Zenica, Vive women Tuzla, as well as many other organizations, led by organizations gathered in the Safe Network BiH, opposed to this idea and proposed an alternative solution. In January 2016, we will continue to lobby members of federal government and the parliament in order to come up with a solution that will provide the best protection for victims of domestic violence.

The Council of Ministers adopted in late December 2015 the Law on Changes and Amendments to the Anti-Discrimination Law and sent it to the parliamentary procedure. In addition to the great changes in terms of the procedure, that guarantee better protection to the victim of discrimination, this law also provides introduction of new grounds on which discrimination is prohibited. Sarajevo Open Centre has contributed to these changes from the beginning (September 2015) of the process by working on the amendments to the legislation.

The draft law, which will be on the agenda of both houses of the BiH Parliamentary Assembly in the spring of 2016, also includes a ban on discrimination based on sexual orientation (important for lesbian, gay and bisexual people), gender identity (important for transgender people) and sexual characteristics (very important for intersex people).

Once this law is adopted, BiH will be the second country in Europe to guarantee explicit protection from discrimination to intersex people. Of course, the real struggle begins only later, when the first cases of discrimination of LGBTI people get processed, but this change is a big step forward too.

4. The struggle for a fairer system of maternity benefits payment in the Federation begins

A large number of studies and reports have found discrimination on the basis of residence (canton in which one lives) and work sector. These same studies and reports have suggested the establishment of a unique fund on the level of Federation of BiH. Prime Minister Novalić has announced on several occasions the formation of such a fund. Sarajevo Open Centre will continue to contribute to this process, in the hope that in 2016, we will get the law that will foresee establishment of the new fund and thus bring a new, more equitable solutions.

5. Rights of LGBTI people in operational plans of the entities and the state

In December 2015 Government of Republika Srpska adopted the annual operating plan according to the Gender Action Plan, that for the first time, foresees specific measures for improvement of the rights of LGBTI people. At the beginning of 2016 operational plans for the Federation and the state level will be adopted, as well. In these operational plans there will be specific measures to promote the rights of LGBTI people too.

Thus, in 2016 institutions of BiH will for the first time work on specific problems related to violence, training of state officials and law amendments. If one takes into account that it has been difficult to achieve any kind of dialogue with representatives of institutions so far, this is a big change.

6. Changes to the law on the government to a greater number of women in the executive branch

The Commission for Gender Equality of the House of Representatives of Parliamentarian Assembly BiH endorsed at its last meeting during the end of December 2015, the draft of the Law on Amendments to the Law on Council of Ministers and the same should be on the agenda of both houses of the BiH Parliamentary Assembly in the spring of 2016.

Sarajevo Open Centre presented Draft of the Law on Amendments to the Law on the Government of the Federation BiH in December 2015 to the Commission for Gender Equality of the House of Representatives of the Federation BiH. The discussion at the level of the Commission is next to happen. If these two laws are to be adopted, the future government, after general elections in 2018, will not be able to be formed without that at least 40% of ministerial positions occupied by women.

7. Discussions on the Civil Partnership Law has started

Although the problems of LGBT community are many and diverse, one should not forget one of systemic discrimination – the impossibility of exercising the rights arising from the joint family life of same-sex couples. Sarajevo Open Centre started to work on this issue in 2015, and in 2016 we will present the proposal for the Civil Partnership Law. BiH political parties, will show, through their official stand towards this law, how much are they really parties of all citizens and whether they are truly for European Integration of Bosnia and Herzegovina.

8. Changes of Election Law in BiH: gender quota of 50%

In 2015, interagency working group has been established, consisted of parliamentarians, ministers and representatives of the Central Election Commission BiH, aiming to make proposals to change and amend the Election Law BiH or perhaps even to create an entirely new Election Law. On the above mentioned thematic session of the Commission for Gender Equality of the House of Representatives of Parliamentarian Assembly BiH in September 2015, Sarajevo Open Centre has proposed its proposal for amendments to the Election Law, with the aim to increase the number of elected women parliamentarians to at least 40%.

Since our proposal was based on maintaining open election lists, and the current political discussions leading to the closing of the electoral lists, we will soon propose a new solution as well, which will, in the case of introducing a closed list, foresee a mandatory gender quota of 50%.

9. The struggle for a dignified life of transgender people

2016 will also start with advocating for the adoption of the Law on Gender Identity in Federation BiH and Republika Srpska that would provide systematic protection and access to specific rights in accordance with the needs of transgender people in BiH. Sarajevo Open Centre will present a model law developed by our working group.

10. Final Amendments to the Criminal Code of FBiH:

Please note that numbers of listed topics do not indicate the level of importance or some other form of hierarchy, but rather represent areas where Sarajevo Open Centre will be working at the same time and in full capacity. Having in mind that we have actively responded to current developments in our society for years now, we will do so and during 2016 as well, and be open for all relevant issues.

Saša Gavrić is one of the founding members and executive director of the Sarajevo Open Centre, an organization that advocates for social inclusion and full respect of human rights of LGBT people and women. 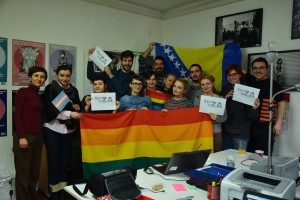 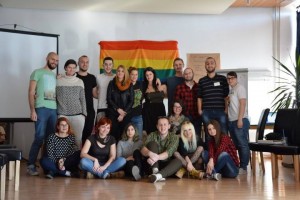 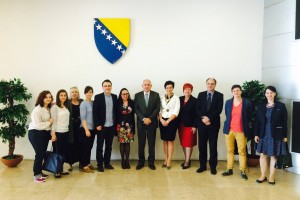 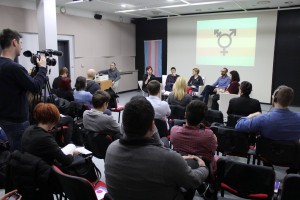 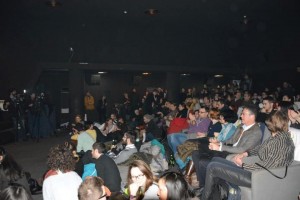 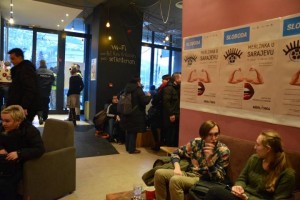