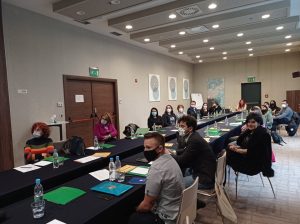 The aim of the event was to talk with medical and legal experts about the findings of the research, about intersex issues from several angles and see where we are missing in BiH and how to overcome the challenges. The conference proved to be an excellent opportunity to gather the professional public, create further modalities of cooperation and improvement of the position and rights of intersex persons in healthcare and the legal system.

The conference was organized in four panels:

Panel I – Providing Ethical and Inclusive Healthcare to Intersex Persons

Panel III – Legal and Medical Regulation of Intersex in BiH

The first panel, Providing Ethical and Inclusive Healthcare to Intersex Persons, offered clarification of terminology and ethical guidelines for clinical practice that should go from the so-called optimal gender to child-centred strategies as most appropriate. Kristian Ranđelović, an intersex activist from Serbia, pointed out that the term closest to our B/C/S language would be ‘međuspolnost/međuspolne osobe‘, and Milica Sekulović, a doctoral student in pedagogy at the Faculty of Philosophy in Belgrade, offered a historical overview of intersex, all the way to postmodern and modern clinical practices, ethics and surgical gender reassignment. Advice was also offered to parents in the event of the birth of an intersex baby, how to talk to children but also medical staff and request complete information. “In the treatment of intersex persons, it is important that parents consider all factors before making decisions, and that doctors do not perform surgery if it is not necessary to protect a person’s health, or if it is only cosmetic – to postpone it until the child can make an independent decision. Gender is formed under the influence of various factors, both genetic, hormonal and social, and surgical intervention or surgical reassignment will not lead to the formation of the desired gender in intersex persons,” said Kristian. 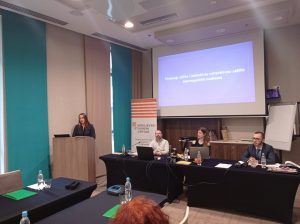 At the panel Basic Principles of Good Clinical Practice in the Treatment of Intersex Persons, the panellist was MD Vladimir Kojović, spec. of Urology and Pediatric Surgery, employed at the Institute for Maternal and Child Health Dr Vukan Cupic, Serbia. He spoke about sex characteristics development disorders (a more inclusive, non-pathologizing term: diversity or differentiation of sex development) – the types and how they are treated, how frequent they are, how they are diagnosed, etc. He emphasized three aspects of treatment (psychological, endocrinological and surgical) and the importance of a whole range of specialists, from neonatologists to many other doctors.

At the panel Legal and Medical Regulation of Intersex in BiH, Vanja Burić, lawyer and researcher, spoke about the results of the research conducted among the leading clinical centres in BiH, ministries of health, as well as health insurance institutes/funds. She concluded that, based on the answers of health institutions, there is no record of the number of children born with intersex characteristics, that intersex before and after birth is determined by prenatal and postnatal diagnosis, that there are no clearly defined medical procedures and guidelines for dealing with cases of intersex, the decision on surgical treatment is made by the child’s parents and guardians. “It is unclear what happens in a situation when intersex is discovered at a later stage of child’s development. It is unclear whether parents are familiar with the intersex characteristics and risks of certain medical treatments, and it is clear that the principle of the best interests of the child defined in the Convention on the Rights of the Child is not guaranteed in medical practice”, said Vanja. She stressed the need to educate medical staff on all aspects of dealing with intersex persons. She also pointed out the analysis of the legislative framework at the state and entity levels, and the inconsistency of regulations, as well as the insufficient protection of intersex persons by legal acts at the state and entity levels. 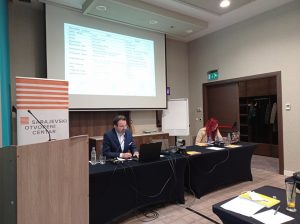 MD Biljana Milinković, PhD Sci, spec. of Pediatrics, Head of the Pediatric Department of the University Hospital Foča, addressed the institution, which is the only one of the contacted tertiary healthcare institutions throughout BiH to give complete and positive answers to questions about medical treatment of intersex children. Dr Milinković pointed out that the University Hospital Foča did not have any cases of intersex in practice. She presented to the participants the intersex medical conditions. “When it comes to surgical treatment, the consent of an intersex person or child is required, unless surgery is needed to preserve the child’s vital health, or if it is not a condition that could jeopardize the further physical and mental development of the child”, said Dr Milinkovic. She also emphasized that parents are familiar with the risks of medical treatment and that this issue requires greater sensitization and education of both medical staff and society as a whole.

Erin Vlahović, Trans Aid activist from Croatia, and Kristian Ranđelović from XY Spectrum, Serbia, spoke at the panel Problems and Needs of Intersex Persons in the field of Human Rights. They both shared their life story, what has it been like to be an intersex person in the past but also today. They talked about the challenges they face most in health care facilities, most often due to the ignorance of doctors on the issue. Erin also spoke about the importance of activism and the fight for human rights of intersex persons in the Balkans. As they stated, currently only the two of them are publicly out and loudly fighting for a better position in society and the system. As the panelists concluded, the fate of an intersex person should be decided exclusively by the intersex person, and this can be solved through education of medical staff, as well as through the adoption of various legal solutions that are flexible and pragmatic.

Through the discussion, the participants tried to find the best ways to raise awareness about the human rights and needs of intersex persons in BiH, to provide inclusive health services and care, without medically unnecessary surgical procedures to normalize sex/gender. We hope to open the way for new modalities of cooperation with health workers, for the benefit of intersex persons.

The holding of this conference, through institutional support to Sarajevo Open Centre, was supported by Sweden through the development cooperation program.