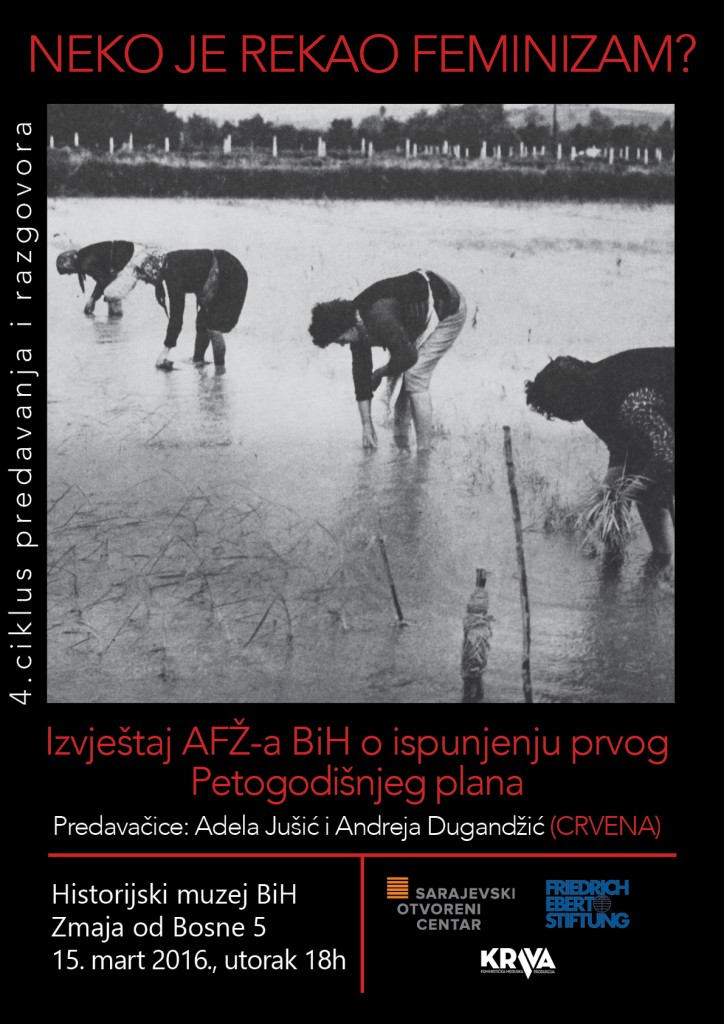 The Fourth Cycle of Lectures

Sarajevo Open Centre and the Friedrich Ebert Foundation in Bosnia and Herzegovina will organize 6 lectures in 2016 which will cover the following topics: Antifascist Women’s Front Archive BiH, ideology and language, challenges facing feminism today, feminist critique of political economy, the relationship between religion and feminism and reproductive rights.

Topic: The Antifascist Front of Women of Bosnia and Herzegovina – Report on execution of the first Five-year plan

We want to invite you to the 4th cycle of feminist lectures and talks Somebody said feminism?. In the first lecture Andreja Dugandžić and Adela Jušić (Association for Culture and Art CRVENA) will speak about the online Archive of antifascist struggle of women of Bosnia and Herzegovina and Yugoslavia, which is a part of the program “What has our struggle given us?” After looking into the Archive, with a special focus on documentation of correspondence between the local divisions of AFŽ B&H (1942-1950) they will discuss the structure and the inner-workings of the Antifascist Women’s Front, the ideology and the narrative of the organization, and the social and political circumstances that brought about its formal disbanding. Several artworks on wartime and post-war Yugoslav women’s activism will also be presented, which will furthermore serve to suggest the possibility of using the Archive to produce new content and knowledge. Finally, they will discuss the contemporary configuration of the women’s movement in BiH in relation to AFŽ and the way in which we are organized around the key socio-political questions.

Andreja Dugandžić lives and works in Sarajevo. She is a member of the Association for Culture and Art CRVENA where she coordinates the program “Šta je nama naša borba dala?” (What did our struggle bring us?), which aims to develop an online Archive of B&H and Yugoslav women’s antifascist fight. She has been a dedicated and an active advocate for feminism and she is a cultural worker, an artist and an activist. Andreja is a performer/writer in the musical duo Black Water and her Daughter.

Adela Jušić was born in 1982 in Sarajevo, Bosnia and Herzegovina, where she still lives and works. She graduated from the Academy of Fine Arts in Sarajevo in 2007 and in 2013 she received a Masters Degree from the Universities of Sarajevo and Bologna in Human Rights and Democracy in Eastern Europe. Her work was displayed at various international exhibitions, including: Frestas – Triennual Art, Sorocaba, Sao Paolo, Manifest 8, Murcia, Videonale Kunstmuseum Bonn; Image Counter Image, Haus der Kunst, Munich; Ja više nikada neću pričati o ratu, Färgfabriken, Stockholm, etc. She participated in several residential programs for artists (ISCP, ISCP, New York, Kulturkontakt Vienna, etc.) and she is a winner of the YVAA 2010 Award, Henkel Young Artist Price CEE 2011 and the Special Award of the October salon 2013.