Our Lives Exist Beyond the Four Walls

During ten years of existence, Sarajevo Open Centre has organised numerous street activities wanting to draw the attention to the threat of rights of LGBTI persons, women and marginalized groups. Although equality battles are waged on different fronts, the street is one of the most important. There were plenty of activities, and Azem Kurtić wrote about the most important ones.

The battle for equality is waged on different fronts and it includes the change of law, advocating campaigns, work with politicians, judges and police officers. It also includes the work with the media, journalists, citizens and those who do not see the importance in equal access to rights. One of the more important fronts in this battle is the street.

Ever since the first 8 March protest to the Stonewall Riots in 1969, the world has recognized the importance of public assembly. SOC drew inspiration from these events when organising protests and demonstrations or joining them. Pride parades, protests and street activities send a clear message: We are here, we exist, and we want equal rights!

During the ten years of its existence, the Sarajevo Open Centre has organised, often with the help of other activists or organisations, a range of activities to occupy the public space. There isn’t a single activity more important than the other, but we will nonetheless select only some of them. 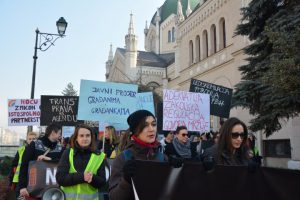 Every march against discrimination and marginalization of a specific group is a march for human rights in general, since there is no compromise or priority list regarding human rights. Led by this idea, on 10 December 2013, on Human Rights Day, SOC activists went into the street with other citizens with the slogan “Human rights abroad”. The assembly began in front of the Academy of Arts, and then they marched to the Faculty of Philosophy for the rights of women, young people, Roma people, LGBTI persons, persons with disabilities, war survivors, refugees, returnees and everyone else who may not even be aware of being discriminated.

This march was organised as part of a seven-day-celebration of the International Day of Human Rights that year. The march sent a message that the rights guaranteed by the Universal Declaration of Human Rights and cannot be and must not be selectively applied.

Gathered around one idea – rights for everyone, the attendees at the march sent their messages on banners: “Test yourself for homophobia”, “Silence isn’t gold”, “Equality, justice, freedom = human rights”, “The right to breathe clean air”

Three years later, the same day and place, on 10 December 2016, the Sarajevo Open Centre, CURE Foundation and Civil Rights Defenders, with the support of other organisations and individuals, organised another human rights march. “Human rights on the agenda” was the slogan of this march, with two hundred people gathering. This was the most populous march to date, and all those who marched that day, came back home filled with positive energy which was felt among the crowd. The number of people attending the march grew as the march was coming to a close, and it went by without a single incident.

Gathered around one idea – rights for everyone, the attendees at the march sent their messages on banners: “Test yourself for homophobia”, “Silence isn’t gold”, “Equality, justice, freedom = human rights”, “The right to breathe clean air”.

The procession briefly stopped in front of legislative bodies (Federal Parliament, The Government of the Sarajevo Canton and finally the Parliamentary Assembly) where they read particular requests. The special focus of the requests pertained to the protection of the rights to life and safety, protection against violence, the creation of a tolerant society, ensured access to healthcare and the protection of public goods.

On 21 December 2015, as part of the campaign “16 Days of Activism against Violence against Women” SOC and Medica Zenica held a press conference on the square in front of the Parliament of the Federation of Bosnia and Herzegovina with the aim of drawing attention to the insecure financial position of safe houses in the entire BiH, especially in the Federation.

The message from the gathering was that safe houses deserve and have the legal right to state support, and that the safety of violence survivors must not be less important than the comfort of politicians. One safe house, ensuring the accommodation for 25 survivors of domestic violence, annually requires 240,000 KM to operate properly. The Law on Protection against Domestic Violence stipulates that the Federation of BiH has to finance safe houses in the amount of 70% of total funds. The Draft Budget of FBiH for 2016, for all six safe houses in FBiH planned a total of 162,000 KM, as in the previous budget. At the same time, 226,000 KM annually is allocated for the accommodation and expenses of ministers in the Federal Government.

Together with the participants of the Žarana Papić School of Feminism, the activity was attended by the representatives of the Association of Vive Žene from Tuzla, CURE Foundation, and citizens who wanted to be part of the activity.

“Equality now” was the slogan for SOC’s street activity that was held on 27 April 2016 in front of the Parliamentary Assembly of BiH, when the recommendation for amendments to the Election Law and the Law on the Council of Ministers of BiH was on the agenda of the session of the House of Representatives of the Parliamentary Assembly of BiH. Other organisations and activists dealing with gender equality and political participation of women joined the protest.

The walk which commemorated IDAHOT 2016 in Sarajevo was quickly dubbed the Sarajevo Zero Pride. On that day, activists strolled several hundred meters down the street Obala Kulina Bana, carrying the flags, smiling and happy 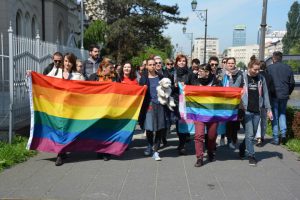 Zero Pride and the Grand Coming Out

During the celebration of 17 May, the International Day Against Homophobia, Transphobia and Biphobia (IDAHOT), in 2016 in front of the Federal Parliament, SOC wanted to point at the disadvantaged position of LGBTI persons in Bosnia and Herzegovina. The plan was to call upon the delegates in the Federal Parliament to honestly and resolutely pledge themselves to the equality of LGBTI persons.

A decree with five concrete requests was handed out to the delegates of the Parliament, with the final aim of protecting the human rights of LGBTI persons. After peaceful protest standout, the distribution of information material, distribution of decrees, a spontaneous walk down Obala Kulina Bana occurred.

The walk was quickly dubbed as the Sarajevo Zero Pride. On that day, activists strolled several hundred meters down the street Obala Kulina Bana, carrying the flags, smiling and happy.

The ninth year of SOC’s existence will be remembered by the performance in front of BBI Centre Sarajevo as part of the celebration of the International Coming Out Day. That day, 25 October 2016, will be remembered because the activists went out into the streets, which are theirs as much as everyone else’s, despite all the comments, disapproval, threats and violence which lesbians, gays, bisexual, transgender and intersexual persons face every day. 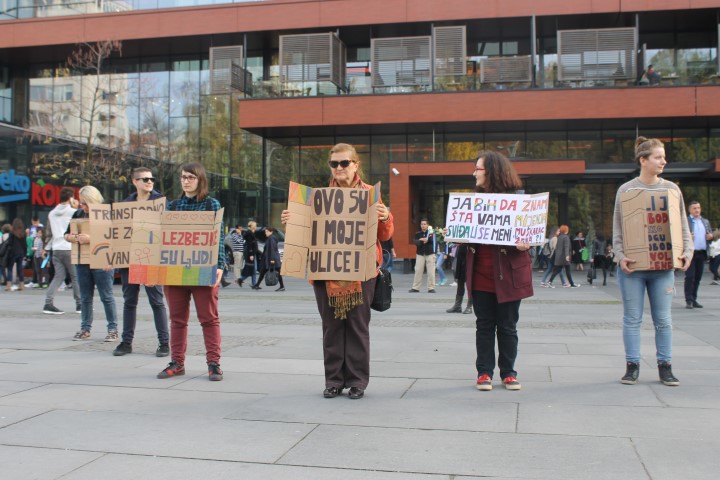 The activity called “Our lives exist outside our four walls” emphasized the fact that visibility leads to greater acceptance of LGBTI persons, and leads to a decrease in discrimination and violence, which happens almost on a daily basis and always goes unnoticed. LGBTI persons are a part of this society, where they live, work, create, learn and contribute the best way they can, for a better tomorrow for all of us.

The activity called “Our lives exist outside our four walls” emphasized the fact that visibility leads to greater acceptance of LGBTI persons, and leads to a decrease in discrimination and violence, which happens almost on a daily basis and always goes unnoticed

“These are my streets too!” – was written on one of the banners held by the activists of the Sarajevo Open Centre and the CURE Foundation as well as other activists during a 45-minute performance.

The failure to provide the right to assembly was not answered with silence. “Violence Is Not Normal” was the motto of the protest march against violence against LGBTI persons planned for 13 May 2017 at 12:00. It was not held because the Ministry of Traffic of the Sarajevo Canton did not approve the march along Titova Street, from the Eternal Flame to the Parliamentary Assembly of BiH, although the request had been filed two weeks ahead of the legally prescribed deadline. This was a sign that the battle for LGBTI rights, and the rights of all other minority groups in Bosnia and Herzegovina, has to continue even stronger and more adamantly.

In response to the Ministry’s action, SOC held an emergency press-conference where they presented the details for cancelling the march, pointed fingers at the ones to blame, and announced a protest gathering in front of the Sarajevo Canton building. The protest was held on 13 May 2017, at 12:00 with the support of numerous other activists.

When it was needed, we responded to support gatherings, like the one held on 16 June 2016, where we expressed solidarity with all the victims of terrorist attacks happening in the world, especially for the victims of the terrorist and homophobic attack at the gay club in Orlando, USA, which took the lives of 50 people and injured more than 50 people.

SOC activists also participated in the gathering in front of the Consulate of the Republic of Croatia in Sarajevo, supporting our fellow fighters in Croatia, after tear gas was thrown into the SuperSuper club on the night of 11 February. “Zagreb Today, Sarajevo Tomorrow” was the message on one of the banners at this gathering, since what happened in Zagreb can easily happen in Sarajevo as well. That is why it was important to send messages of support and to state that we will not turn our backs to homophobic attacks which are definitely hate crimes.

On 3 October 2016, SOC activists met in front of the Polish Embassy protesting with a group of citizens, thus joining numerous European cities which organised protests supporting women in Poland. Dressed in black, the group sent a clear message that it was against depriving Polish women of the right to make decisions about their own bodies, which is a direct attack on their body anatomy and freedom. The reason for the “Black Protest” was the initiative for criminalizing abortion in Poland, which would make abortion legally impossible unless the mother’s life was in danger. Owing mostly to women in Poland, but also to the protests in many European countries, even in Sarajevo, this law was not adopted.

Through street activities, and gatherings like these ones, when it is necessary to stand side by side with women in Poland or express solidarity with the LGBTI community in Croatia, for the last ten years, SOC demonstrated that it was against the violation of human rights, regardless of where it happened. Ten years of fighting for equal rights and equal access to rights for everyone in Bosnia and Herzegovina would not have been possible without activists, partner organisations and friends of the community, to whom the Sarajevo Open Centre is very grateful. Together with them, we remain in the streets, where we wage our loudest battles!