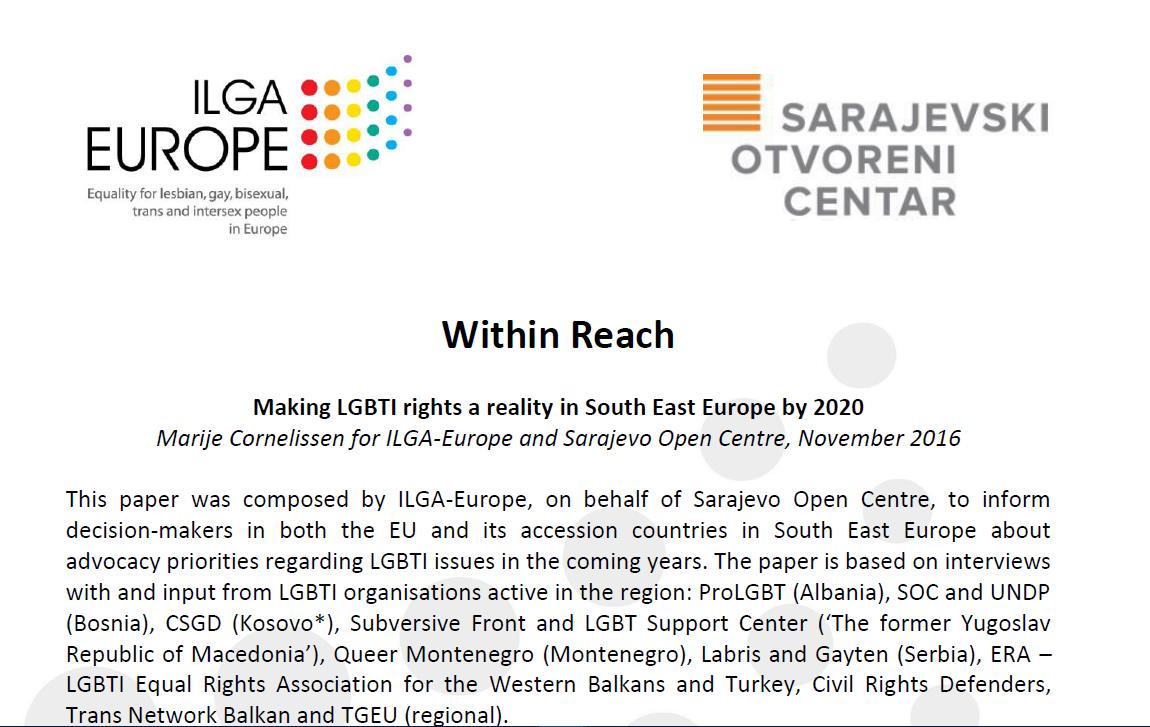 Every year the Directorate-General for Neighbourhood and Enlargement Negotiations (DG Near) publishes an Enlargement Package assessing where accession countries stand in implementing key political and economic reforms en route to joining the European Union (see  Enlargement Package 2016 here). And every year ILGA Europe in collaboration with organisations working to promote and protect LGBTI rights in those countries, participate in NGO consultations, submit our own progress report to DG Near addressing progress and concerns relating specifically to LGBTI rights, with a view to feeding the voices of activists into the Enlargement Package and subsequent EU actions for promotion of LGBTI rights.

These engagements have been highly successful; after all, LGBTI rights play a much bigger part in the criteria countries wishing to join the union need to meet than they did just a few years ago. But, up until now these actions have largely been restricted to the framework of the Enlargement Package and of what is in the realms of the EU acquis on the topic. This year we wanted to go a step further, to look beyond the EU framework. We wanted to articulate not only that which the EU is interested in, but that which is prioritised by activists on the ground for LGBTI rights looking forward, what are the issues that are of most concern, and what are the concrete goals activists are working towards achieving across the Western Balkans by 2020. Regardless of whether those goals fit within the EU acquis.

And so “Within Reach”, a policy paper covering all of these topics, was composed.

The paper asserts that the situation for LGBTI people is at a pivotal moment in most accession countries (with the exception of Turkey, not covered by this paper, and to some extent also Macedonia). Much has been achieved in recent years, mainly due to the EU accession process, to persistent efforts in engaging with key institutions and players in Brussels and at national level, and a consequently tangible increase in focus on the importance of LGBTI rights within the criteria for accession. There have been key developments in anti-discrimination and hate crime legislation across the region, respect for freedom of assembly and expression has been growing, and an increase in the number and capacity of LGBTI civil society organisations is evident. In fact, the situation for LGBTI rights in the Western Balkans, at least on paper, is more advanced than in several countries within the EU, such as Romania, Hungary, or Lithuania, for example (see Rainbow Europe Map here).

Yet much is left to be done to ensure the protection of the human rights of LGBTI persons in the region is real and lasting. And this, right now, before accession, is the time to do it. The region is in a unique position, and in a unique moment in time. Governments of accession countries are keen to progress in order to join the EU, which provides an opportunity for the LGBTI movement to reach further to achieve key aims, so that the fate of LGBTI rights in Romania and Bulgaria, where boxes were ticked prior to accession but little progress has been made since, is not repeated.

This paper was written with a view to capitalizing on this opportunity, by explicitly stating what these aims are in order to be able to use the paper as an advocacy tool from here on out. It outlines the overarching priorities for the region as being effective implementation of existing legislation across urban and rural areas, promotion of an enabling environment in which civil society is a partner in policy making and implementation, and further development of the legal framework, including introduction of legal gender recognition and registered partnership for same sex couples. At the same time, however, the paper also recognizes key differences across the individual countries of the Western Balkans that need to be taken into consideration if progress is to be made.

It is an exciting and opportune time for LGBTI rights in the Western Balkans. The achievements to date are inspiring, and the prospects for the next few years – extremely promising. But we need to go beyond legal frameworks and the acquis of the EU, and focus instead on the priorities, issues and prospects most important for the LGBTI communities in each country.

Have a read through our policy paper to get an understanding of what activists across the region are working on, and to see that real, sustainable change is, as the title of the paper suggests, within reach…

The paper was composed by ILGA-Europe, on behalf of Sarajevo Open Centre. It is based on interviews with and input from LGBTI organisations active in the region: ProLGBT (Albania), SOC and UNDP (Bosnia), CSGD (Kosovo*), Subversive Front and LGBT Support Center (‘The former Yugoslav Republic of Macedonia’), Queer Montenegro (Montenegro), Labris and Gayten (Serbia), ERA – LGBTI Equal Rights Association for the Western Balkans and Turkey, Civil Rights Defenders, Trans Network Balkan and TGEU (regional).