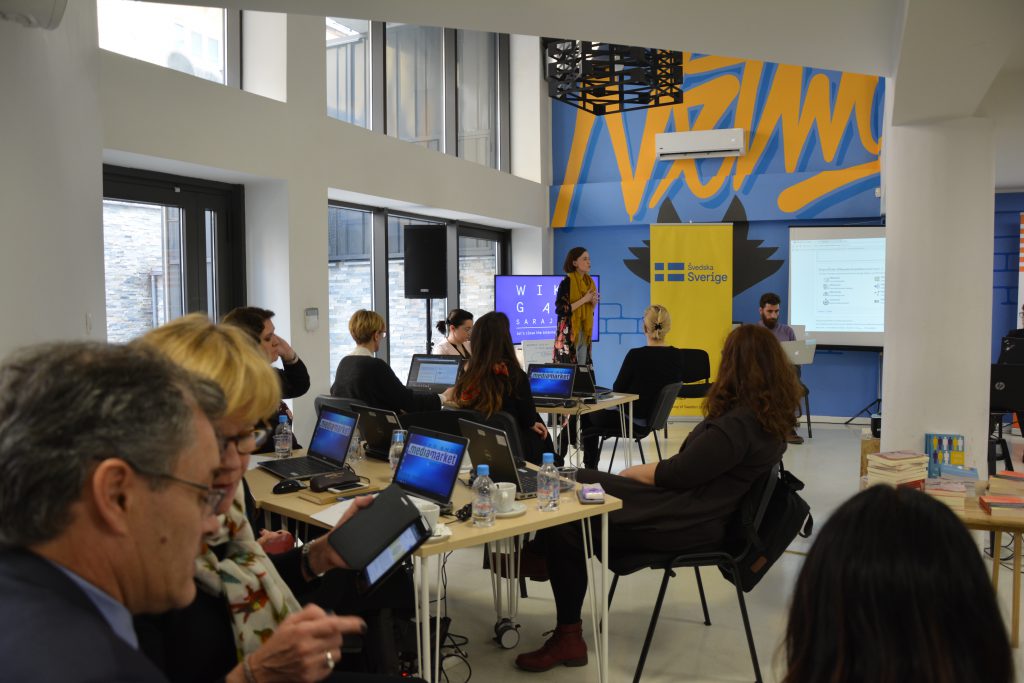 In an effort to change the practice that most of the content published on Wikipedia about men is actually published by men, Sarajevo Open Centre has on March 7th, 2018, with the help of the Embassy of the Sweden in Bosnia and Herzegovina, organized WikiGapBiH – Edit-a-thon event.

Both men and women from various fields of social life participated in the event, with one aim to expand the content and publish information about Bosnian-Herzegovinian women on Wikipedia.

WikiGapBiH took place in the Networks quarters in Sarajevo, where opening words were given by Anders Hagelberg, the Ambassador of the Kingdom of Sweden in Bosnia and Herzegovina, and Emina Bošnjak, executive director of the Sarajevo Open Centre. Also, the minister of foreign affairs of Sweden, Margot Wallström, spoke via video link.

The first thing that participants were introduced to were elementary rules of Wikipedia, the so called five pillars of Wikipedia and creation of user accounts, which is the precondition for editing and creating content on Wikipedia. This is also important for all those who intend on creating and editing content in the future.

After introduction to the rules of Wikipedia, content editing of content has commenced. Fourteen women and one man have published texts about Bosnian women for the first time on Wikipedia. For the first time in a format of encyclopedia, data about women in art, sports, politics, music and other fields were archived on Wikipedia.

Also, as an introduction for WikiGapBiH initiative, Sarajevo Open Centre has started a campaign which is realized with the support of the Swedish agency for international development and cooperation (Sida). Thus, from 7th-21st of March, on the streets of Sarajevo, Banja Luka, Mostar and Tuzla, citizens will be able to see billboard campaign with a symbolic name naWIKIvanje. The goal of the campaign is to invite girls, women, but also boys and men to edit Wikipedia and create content about important women from Bosnia and Herzegovina, and also to read about the work and contribution of these women on Wikipedia.  It should not be allowed for the work of Bosnian women to be left unknown, so we insist that Bosnian women should be noted on Wikipedia too!

This Edit-a-thon event and following campaign are representing the beginning of the campaign of the decrease of the gender inequality on the Internet and it is recommended that everybody who wishes to give his or her contribution to that initiative is to do so by publishing content about important, inspiring and revolutionary Bosnian-Herzegovinian women on Wikipedia. There are many women who are still invisible on the Internet. Let us fill the gap!