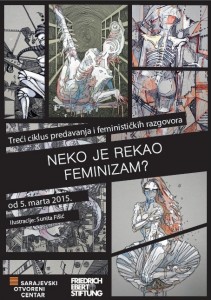 Sarajevo Open Centre, in partnership with Friedrich Ebert Foundation, in March of this year, before the International Women’s Day, starts a new round of lectures and feminist discussions Somebody said feminism?

Leitmotif of this round will be policitics – politics that create women’s magazines, female politicians in positions of power, biopolitics of the women’s bodies, representation of female eros in the popular and folk music, virtual space, representation of female sexuality in contemporary post-Yugoslav film, the relationship between market and women’s work, and the attitude toward women in the monotheistic religions.

The novelty compared to the previous two rounds will be giving space for the promotion of works by a young artist Sunita Fišić from Sarajevo, whose illustrations will accompany the announcements of lectures and feminist discussions on posters and promotional materials. Interesting illustrations of strong women are part of her series called Females.

Soon we will give a detailed announcement of the first lectures and feminist discussions in the framework of the third cycle, which will be held on Thursday 05 March this year at the Museum of Literature and Theatre Arts of Bosnia and Herzegovina, starting at 18:0. The lecture will be titled: Cosmo-politics: dietary feminism women’s magazines. The lecturer will be Nenad Veličković, a writer and professor at the Philosophy Faculty in Sarajevo, who will talk about the (anti)feminism of women’s magazines.

The lectures and feminist discussions will be held at the Museum of Literature and Theatre Arts BiH.